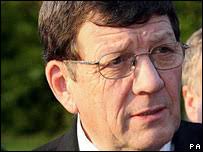 PAT Doherty‘s interview in the Guardian is being interpreted as an offer to the DUP – permit the devolution of policing and justice, and in exchange the IRA army council will be disbanded. “I have no doubt, given all of the issues that we have resolved from the very beginning, all of the issues that you may have thought were insurmountable, … on the British side … the unionist side and the republican side, if we are serious about moving this whole process forward … then we can deal with any issue,” Doherty who was named as a member of the IRA leadership in 2002, said. “If you look at any of what were perceived as insurmountable issues some time back, all of them were resolved. I have no doubt that issues can be resolved if there is dialogue.”