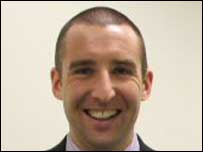 THE deputy chairman of the DUP’s youth association, Edward Hanna (25), has announced he will be joining the Ulster Unionists. The ex-DUP executive member claimed: “The centre of DUP politics has moved from its community base and people have taken to being very arrogant and not entirely out of touch but certainly politics driven by the people. The DUP completely ripped up their manifestos after the elections. There was no consultation with the people, there was no consultation anywhere.” The DUP responded: “In this case it would be best described as sour grapes. It is up to Mr Hanna if he wishes to use arrogance and rumours as an excuse and cover.” More unusually, the former chairman of the SDLP’s Bangor branch, Andrew Muir (pictured), is joining the Alliance Party. And in the Foyle constituency, Sinn Fein has selected Martina Anderson to take Mark Durkan on in the next general election.Muir told the Belfast Telegraph his decision was in no way a criticism of leader Mark Durkan.

But he argued that with the SDLP on course to merge with Fianna Fail this year, the time was right to realign himself with a party “in tune with the real issues facing Northern Ireland today”.

“The politics of Northern Ireland are now fundamentally different than in 1998, when the Good Friday Agreement was signed, never mind 1970 when the SDLP was formed,” he said.

“As a passionate supporter of the Good Friday Agreement, the Alliance Party provides me with a natural centrist home in the post-nationalist era we now live.

“The threat of terrorism and environmental catastrophe now means that the need for European unity outweighs desires for old fashioned Irish unity.

But an SDLP spokesman claimed Mr Muir’s departure was motivated by personal ambition.