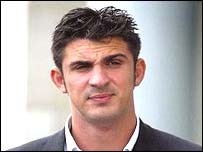 FAREWELL then, and good riddance, to ex-UDA uber-spide, former house burglar, drug dealer, thug, gunman, terrorist, blackmailer, thief, gambling addict, extortionist, intimidator… and former loyalist political negotiator Andre Shoukri. Perhaps more than anyone, Shoukri – who was in UDA/UPRG delegations that met with two secretaries of state and the Irish President’s husband – embodied how the Two Governments’ strategy of inclusion could fall flat on its face and put innocent lives at risk. When Shoukri was sentenced to six years in jail after being caught in possession of a loaded gun, he appealed and the sentence was reduced to just two.

If he hadn’t been released early in early 2004, Shoukri would not have been able to go on to feed his gambling habit – the Irish News reported that within two months he managed to weasel £20,000 from Martin McAleese’s business associates for a ‘community project’.

In the same month as he was hob-nobbing with the Irish President’s other half, June 2004, he was, according to Mr Justice Treacy last week, blackmailing the owner of a north Belfast bar, which he effectively took over after an initial demand of £1,000 ‘protection money’.

Months later European Union funding for a UDA prisoners’ project in north Belfast was frozen after the discovery of financial irregularities, including the disappearance of £10,000. As his debts spiralled even further, Shoukri stole £10,000 from a boxing match, organised to raise funds for cancer charities. The public outcry forced him into paying the money back.

In November a Belfast city centre club was shut down after police revealed that Shoukri had tried to seize control of the club by threatening to kill the owner. Over the exact same period in 2004, Shoukri was part of a political delegation meeting Secretary of State Paul Murphy, who – a week later and presumably armed with this knowledge – officially recognised the UDA’s ‘ceasefire’ in a bid to move the peace process forward.

In the months that followed, Shoukri was able to, according to the judge, continue to receive the bar’s ‘protection money’ on a regular basis and steal food, alcohol and the contents of the gambling machines.

And when, in May 2005, there was no profit to hand over, a gun was put to the head of the bar owner’s partner, who was forced to borrow £4,000 from family and friends and hand over the books and keys to the bar. At the end of their tether, the couple brought in the police, whose undercover operation led to Shoukri’s jailing.

The couple were put in a witness protection programme, but unbelievably, had to be moved twice after it was suspected that the UDA gang had somehow managed to get its hands on details of their secret location. How isn’t clear.

In the meantime, a desperate Shoukri had, according to the Irish News, ordered his UDA men to carry out a series of botched robberies and kidnappings, although police successes meant that between 2005/2006 more than 25 north Belfast UDA members were behind bars on extortion and kidnapping charges.

In November 2005 Shoukri and Boreland were secretly recorded attempting to extort thousands of pounds from the manageress of the bar in north Belfast. In January 2006 the Irish News revealed that Shoukri had gambled away more than £800,000 in the two years since his release from prison. It reported: “By then he had become an increasing embarrassment to the UDA, which had come under pressure from the British government to end involvement in criminality.” Yet the UDA and its gangsters had been mollycoddled by the Government for years by this stage, while the public continued to suffer. This policy is still going.

In May 2006 the UDA finally expelled Andre, his brother Ihab and their associate Alan McClean, leading to a split and feud – the consequences of which are still being felt today. It was perhaps the arrests the previous November that prompted this cutting loose of this section of the UDA’s unreconstructable hardline criminal element, isolating them totally.

In May this year, the Irish News correctly predicted that a deal had been done – Shoukri would plead guilty in exchange for a nine year sentence that would ensure details of his £860,000 gambling habit with money ’embezzled’ from the UDA would not become public.

When the PSNI said last week after Shoukri and his associates were jailed that they “thought they were above the law”, he was right, since they clearly enjoyed a measure of political protection. “You could say they thought they were untouchable. The fact is they were not,” he said.

With time served on remand, Andre Shoukri is expected to be released in less than two years.