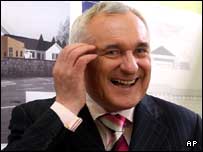 BERTIE Ahern won’t have to worry about brown envelopes any more, as he’s been awarded a £26,500 pay rise – taking his salary to an incredible £216,700. Meanwhile, it’s been revealed that the DUP’s Nigel Dodds claimed more in expenses – £151,412 – than any other Northern Irish MP last year, although at least he attended Parliament. Sinn Fein’s Michelle Gildernew is an abstentionist and somehow managed to require £138,779, although she only claimed £40,898 the year before. The average for SF claims works out at £134,175, while the DUP’s is £122,328, and the Westminster average was £118,000. And worth every penny of the taxpayers’ hard-earned money, the lot of them. Full listings here.