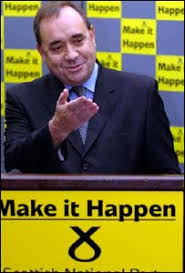 The SNP has achieved significant advances in the Scottish elections (* more below the fold). Part of the SNP’s electoral strategy was the party leadership standing in target not safe seats. Alex Salmond took the greatest risk running in Gordon, eighteenth on the SNP’s target list, and it paid off. The seat was won with almost twice the national swing to the SNP.
Unionism will be targeting South Belfast and Fermanagh and South Tyrone in the forthcoming Westminster elections. The recent Assembly result in South Belfast has given Unionism cause to think with between 2000-4000 regular Unionist voters sitting at home and neither nominal Westminster candidates (Spratt and McGimpsey) appearing to have caught the electorate’s imagination. Besides the electoral pact to be sorted out, should Unionism look about moving in a big name to run? In 2005 the Unionist vote was over 16,000 and greater than 50% and even with a poor performance in 2007 Unionism outpolled Nationalism so it is a winnable and holdable seat. PLUS nearly all existing seats are safe making a change of candidate unlikely to threaten a seat. A big name would also communicate how serious Unionism was about creating the positive story of winning back a seat from Nationalism.

* The SNP advance seems to have been achieved primarily by mopping up the pro-independence SSP vote and a few percentage points off Labour. However, the advances are not as great as predicted with the SNP and Labour almost tied in the popular vote and so far Labour have a clearer lead over the SNP in the regional vote although a bigger SNP lead in the regional vote.