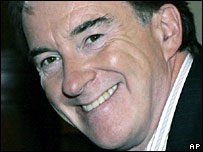 In a new Guardian feature series on the Northern Ireland peace process, Peter Mandelson has criticised Blair’s handling of the peace process, that his commitment to keep it going meant he “conceded and capitulated” to republicans. He says Blair:
“In order to keep the process in motion [Tony] would be sort of dangling carrots and possibilities in front of the republicans which I thought could never be delivered, that it was unreasonable and irresponsible to intimate that you could when you knew that you couldn’t.”
Mandelson also refused to sign a secret letter to Sinn Fein promising concessions on OTRs and other issues but Blair later conceded all these at Weston Park. However, he seems to be drawing back from his criticism, or at least unhappy with the spin put on them, quite ironic really.