Ulster Rugby had its own Cantona moment when Trevor Brennan, the Toulouse player and former Irish international assaulted an Ulster fan during the Heineken European Cup tie between Ulster and Toulouse. Reports from fan websites claim that banter between Brennan and the fans involved nothing more than disparaging comments regarding Brennan’s pub in Toulouse however there are also claims that there were more insulting remarks. Ulster lost a bad tempered game 28-13. 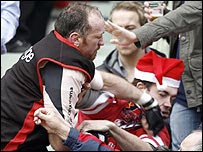