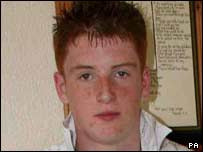 BALLYMENA schools and police met representatives of young people’s social networking website Bebo today to discuss how the company should deal with online sectarianism. This was prompted by the spate of threats message board users made to other children on the site in the wake of Michael McIlveen’s murder. Some of those kids were later charged with the murder, and I have a feeling some of the organisers might be as worried about legalities of the accusations as they are for the childrens’ safety. Of course, it wouldn’t be fair to label all the Bebo content about Micky-bo’s murder as hate-driven, as this heartfelt memorial to the boy illustrates. What is clear is that Bebo’s young users are just using the site as they would any other communication tool, especially text messages. Perhaps it’s the failure to recognise that they are communicating in one medium in the language of another – conflating the notions of a private, one-to-one communication with a widespread, one-to-many publication – that’s part of the problem. Regardless, knowing how hard it is to police Slugger, I can’t imagine how a massive site like Bebo will crack down on online, colloquial txt msg sectarianism. Threats can be reported and deleted, but WTF duz bebo do about this kinda crak, hi? Would they even recognise half of our slaggings of themmuns?