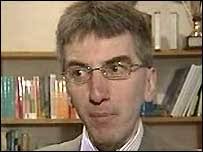 Martin O’Muileoir, speaking on yesterday’s Talkback, offered some advice on how the DUP could sell a deal with Sinn Fein. He advocated that the DUP should “make a good victorious speech”. While declaring victory is very tempting, is it good advice? The DUP have learned from the UUP’s experiences in the process and the UUP suffered from over-selling, will the DUP ignore this lesson and be tempted to crow? If a deal is done should the DUP take a measured approach, perhaps ‘In November 2003 the DUP were tasked with negotiating a fair deal. Now, through hard work and abiding by our pledges, we have succeeded in getting a fair deal. This deal is good for everyone.’?

O’Muilleoir also believed the nationalist community would be “indifferent” to such declarations, would they?Full quote below

How will the DUP make a deal with Sinn Fein? The precedent, the precedent is the wonderful speech. It was a wonderful piece of political acrobatics that Edwin Poots made on the site of the Maze Long Kesh Prison Camp. In the summer when he agreed to chair the Maze/Long Kesh body which is going to build a stadium and a peace centre, a conflict transformation centre and preserve the H Block hospital and what Edwin did, he did what Ian Paisley doing today, he claimed credit for the peace that we enjoy. He said he had democratised Sinn Fein. He said it was a blow to terrorists that actually they were taking part in this panel, in setting up this panel, setting up this peace centre and stadium. And I think the Dup need to take, they need to take that precedent and they need to say all the speeches. They need to say they have defeated Sinn Fein, they promised they would do it in 1985 “I’ll smash Sinn Fein” I think the nationalist community is indifferent to this, they can say whatever they want but I think they could make a good victorious speech to explain why they are going into government. And the great thing is the half-full glasses, that Gregory Campbell didn’t rule out today, he didn’t rule out making a deal by the 24th November.