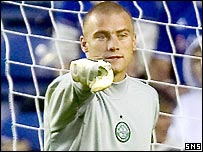 Celtic goalkeeper, Artur Boruc, has received a police caution for “a combination of behaviour before a crowd in the charged atmosphere of an Old Firm match”. This combination of behaviours included crossing himself in front of Rangers fans. The Roman Catholic Church is alarmed, Alex Salmond said it was a ludicrous decision, the Lib Dems believe it did not warrant a caution but criticised the player’s behaviour during the matc and Rangers fans think the Club should have acted. This highlights the tensions between freedom of religion, expression and association and the public order limitations. A simple act of religious reverence? A display of exclusiveness and identification with one community in front of another to provoke? Or both? UPDATE: The Crown Office have denied the caution was for crossing himself but the other gestures he made to the crowd.