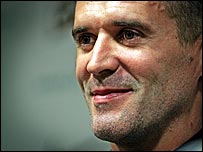 One of the great feuds of Irish football would sensationally appear to be over as rumours are rife that Sunderland Chairman, Niall Quinn, will today unveil Roy Keane as the struggling club’s new manager. In a truly bizarre twist, Keane will be taking over from where his arch nemesis, Mick McCarthy, left off as Sunderland manager last year.

There was controversy in May 2002 when Keane missed Niall Quinn’s testimonial game. Keane also had harsh words for Quinn following a particularly memorable Sunderland encounter with Manchester Utd only weeks after the Corkman had walked out on the Irish team at the World Cup. In that September 2002 game, Keane was sent off for a tackle on fellow Irish international, Jason McAteer, who mockingly referred to Keane’s Eamon Dunphy-drafted autobiography.
Then, of course, there was that World Cup row. The contrast between Quinn’s dedication and commitment to his country and that of Keane was truly exposed with Quinn’s magnificent performances in the World Cup in 2002, when he led the team to the knock-out stages and stepped in as a team leader amidst the furore surrounding Keane’s exit.