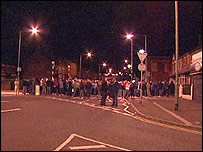 Sinn Fein has criticised the PSNI after several hundred ‘mainstream UDA’ loyalists were permitted to march into the nationalist Oldpark area before being stopped from entering the loyalist Westland estate, the home turf of the Shoukri UDA faction. The mainstream UDA men had marched from Ballysillan and included men armed with golf clubs and baseball bats, allegedly on their way to ‘confront’ the dissident faction in Westland.