At the Helix in North Dublin, Sinn Fein delegates gathered for the first time in a COVID 19 context. The party has much to be happy about they are doing well in the polls in the South and are being touted to become the largest party in the North after the next election. The leadership team of Mary Lou McDonald and Michelle O’Neill is now nearly four years in post and has not been without challenges. From the disastrous elections in 2019 to the success of 2020 they have had to navigate and steer the party through its continuing transition into a force that can compete with Fine Gael and Fianna Fail.

The main event of the morning was the speech by Vice President and Deputy First Minister, Michelle O’Neill. Her speech was standard for what we would expect at a Sinn Fein Ard Fheis with references to the work the party is doing in government, criticisms of the British government and the DUP forming the main base of the speech.

On the party’s ministers performance in government she said;

The global pandemic has ravaged societies across the world.

It has also exposed the sheer depth of inequality in our society.

In response Sinn Féin Communities Minister Deirdre Hargey brought forward supports for those who needed it most.

Then there was a criticism of the British government over the protocol and legacy;

Next week political talks intensify between the EU and the British Government.

I reminded the British government this week that a majority in the north see the Protocol as the solution to their Brexit disaster.

There is no credible alternative to the Protocol.

Businesses in the North continue to access the single market.

They want the protocol to work.

They want certainty and they want solutions.

However, the new red lines set out by the British Government begs the question do they want a solution at all?

We will soon see.

The British State also want to continue to hide their role during the conflict. They remain intent on introducing an amnesty to protect British soldiers who murdered Irish citizens.

Sinn Féin will stand with the families of all victims and lobby the EU and US in support of the Stormont House Agreement and against this universally rejected policy from Downing Street.

There was also a reference back to the centenary of Northern Ireland;

This year has highlighted the failure of partition and the need for it to come to an end.

The Tories and political unionism celebrate the creation of the northern State.

Nationalists have a different experience of the old Orange State, of oppression, one-party unionist rule and the denial of basic political and civil rights.

That is nothing to celebrate.

President Higgins made the correct decision.

And so too did we.

Concluding the DUP were also in the Deputy First Minister’s sights;

The DUP roll back on political agreements, their continued denial of equality and rights is dead end politics.

Their boycott of the North-South Ministerial Council has been declared unlawful by the High Court.

Their futile stunt to provoke outrage is in vain.

Harking back to a bygone era of Unionist rule is a lost cause too.

The DUP has declared that a Sinn Féin First Minister after the next election would give unionism a real problem.

Well, let me be crystal clear.

The days of nationalists need not apply are gone.

I have watched Michelle O’Neill speak at a number of Sinn Fein events since she became the Northern Leader, then Vice President and then Deputy First Minister. This was her first time addressing the Ard Fheis as the latter and unquestionably being the head of a government with ministers to refer too helped lift her own speech and those of the Northern representatives who spoke on issues such as housing and rural development. This was a stark difference from previous years and should be a lesson for anyone who thinks that the party is better being on the outside rather than in the Executive. 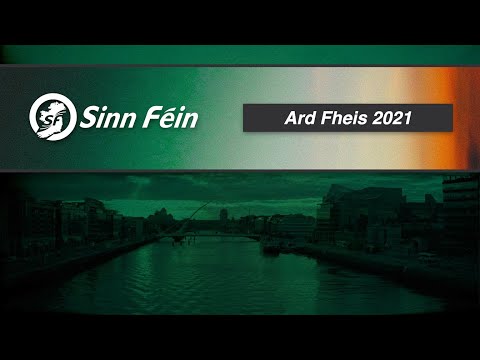