Two DUP councillors quit party over new leadership. Is this a crisis for Poots in his first days in the job?@SJAMcBride | @mickfealty

Accusations of bullying is not the most novel aspect of this story, more that dissenters within the DUP (who have almost rivalled the paramilitarists in Sinn Féin for command and control politics) now speak out regardless of the consequences.

The party has been at the centre of more serious crises than all NI’s parties put together. Partly because secrecy invites inquiry (even when the sum of two and two are made to look like 17 by a media desperate to get them over something).

But it’s also because the press has long deemed its social conservatism out of date (Jurassic is commonplace). But that enmity is a bone deep legacy from its Dieu-Roi Orange (H/T Richard) who always presumed the press was out to get him.

The paranoia that grew from that enmity proved to be a powerful sticking agent. The de facto motto was, let’s stick together, or we will hang apart. That appears to be what’s now gone with Arlene’s departure from the leader’s office.

And it has people if not queuing for the door, certainly decided that whatever the social contract in the party has been before (for the sake of the defence of the union) it’s really not working under the new leader.

One of the most interesting contributions from the South Down defectors on yesterday’s programme was the suggestion that under Poots the party was being methodically shrunk back to its original Paisleyite base.

That’s a reflection (whether it is deliberate or just a loss of nerve on the part of the new leader) of Poots’ failure to reach out to Foster who for many now in the party has become a touchstone for their own position and feelings.

In my to camera piece when Mr Poots was elected, this feels very like the Catholic Church under the leadership of Benedict, who believed the ‘universal’ church could not survive as an authentic body until it became a church of true believers. 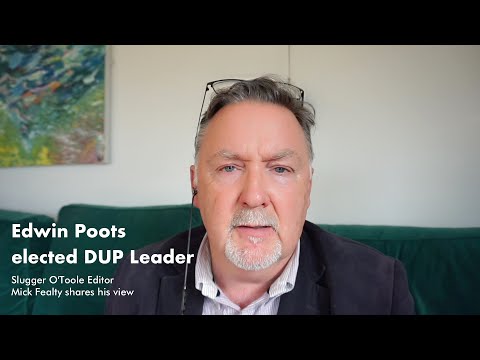 And he might be right. And so might Poots (though I’m not sure he or Mr Paisley Junior or Paul Givan have thought through the consequences of breaking up the Robinson coalition. But the consequences are likely to be substantial.

The irony is I don’t think he actually wanted to be here. Nor, indeed did the Catholic Church, who found a way to get rid of Benedict in pretty short order in the end, and went for the more popular (can we say populist?) Francis…

“Redesigning Reality Part 1: Scrapyard Challenge @ USC” by craigdietrich is licensed under CC BY