Phase 1 is scheduled to be complete this month. Taking the numbers of people receiving a first vaccine dose from coronavirus.data.gov.uk, as well as various press releases and ministerial statements since the 8th of December, it’s possible to plot the actual numbers of people who received a first dose against the target.

The data is encouraging. Since the rollout began of the Oxford/AstraZeneca vaccine the vaccination rate has increased significantly. On average, around 0.37% of the population (or 7,000 people) are receiving the first vaccine dose every day. If the current rate is maintained, then Phase 1 will indeed be completed by the end of January.

The early vaccine data is encouraging. The hunt is now on to identify data that would demonstrate that the vaccination programme is having a real world impact. There may be some tentative early signs. For example, the % share of over 80s among COVID-19 hospital admissions in Northern Ireland has fallen over the last couple of weeks as the percentage of the over 80s who have received a vaccine has increased.

In Israel, the country with the highest number of people vaccinated per capita, there has been a decline in the share of weekly new cases among the over 65s.

Over the coming weeks, more and more early indicators that the vaccinations programmes are having an impact should become available.

Obviously, these remain dark times. The number of excess deaths over the previous 5 year average in the six counties of Northern Ireland were the highest since partition, and second only to the 1918 pandemic since the start of the 20th century. Since the start of January, a new record for the number of COVID-19 deaths in a day (21) was set on the 7th of January and then equalled on the 11th of January.

However, the vaccination programme is proceeding very well, and at current rates the prospect of the entire adult population receiving at least a first dose by this summer is a realistic prospect. There are now grounds for real, genuine, optimism that something akin to regular pre-COVID life may resume this year.

We now need to steepen the curve. 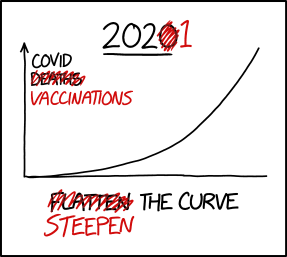 xkcd 2409 by Randall Munroe is licensed under a Creative Commons Attribution-NonCommercial 2.5 License

COVID-19 vaccination doses administered per 100 people, Jan 13, 2021 by Our World In Data is licensed under a Attribution 4.0 International license