Among the problems facing Ireland in 2020, two of the most pressing are the housing crisis in Dublin and severe regional economic inequality.

Far removed from Dublin or any of the prosperous regional hubs such as Limerick, Galway or Cork, incomes in the northwest of Ireland (on both sides of the border) are amongst the lowest on the island. By contrast, despite the buoyant jobs market in Dublin, housing in the capital has become extremely expensive in recent years, with rental costs in Dublin around 80% higher than they were a decade ago.

The map below shows average disposable income per capita in Ireland (as of 2015); Dublin was by the far the highest, with County Donegal being the lowest. Counties in Ulster on either side of the border were amongst the lowest in terms of income. 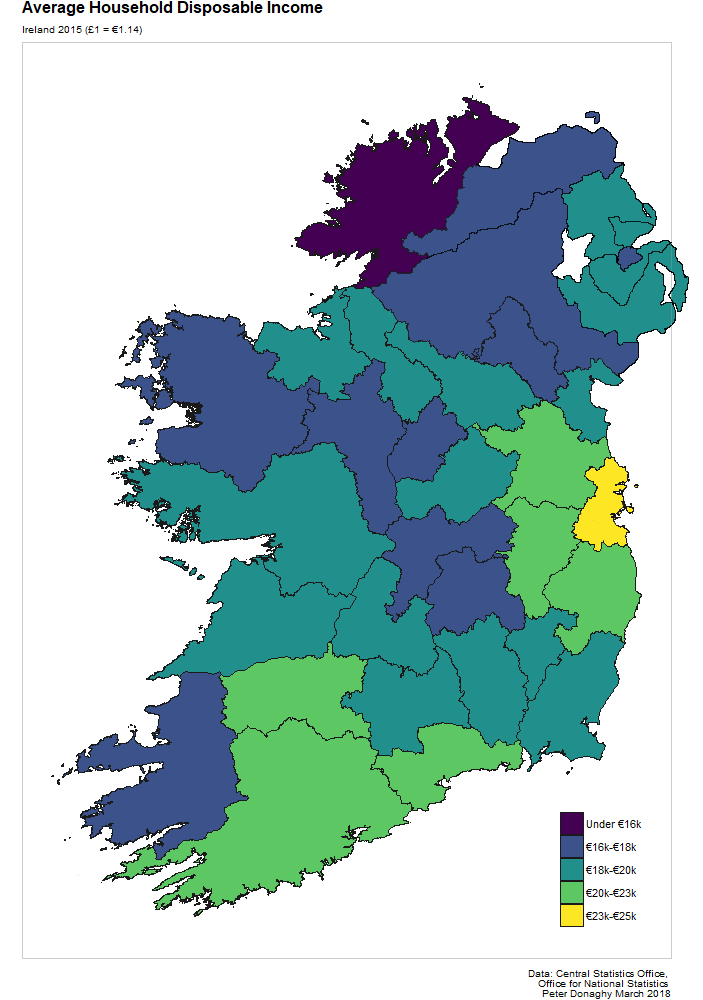 The island of Ireland has a population of around 6.6m. Whilst this has increased in recent years, it is still significantly below its peak population of 8.1m in 1841 before the famine. Nowadays, Dublin has by far the highest population of any county in Ireland, with 20% of the island’s population living in the county. But in 1841, the population was far more spread out.

All but eight of Ireland’s counties have a smaller population than was the case in 1841, and with the exception of the counties containing Derry and Belfast, all of these are the Dublin area counties; Dublin itself, Wicklow, Kildare, Meath, and Louth. The other 24 counties have, on average, less than 50% of their pre-famine population. The counties that have the lowest populations relative to their pre-famine peaks are Cavan (a 69% fall), Monaghan (also 69%), Roscommon (75%) and Leitrim (79%).

These various issues; the overheating Dublin housing market, regional inequalities and rural depopulation, are in a sense linked. The relative prosperity and population growth in counties such as Kildare and Wicklow has arisen largely because of the ease of traveling to the capital from towns such as Newbridge or Greystones. Poor public transport to Dublin has led to an increase for demand for housing in the capital.

The rail network in Ireland is a shadow of its former self. The maps below show the Irish rail network as it was in 1906, compared with what remains of the network today. The disappearance of most of Ireland’s railway infrastructure has hit Ulster the hardest; the north of Ireland went from being the most densely covered by rail to having the sparsest network. There is no rail service at all in the sector northwest of Dublin between the line to Sligo and the line from Belfast to Derry. 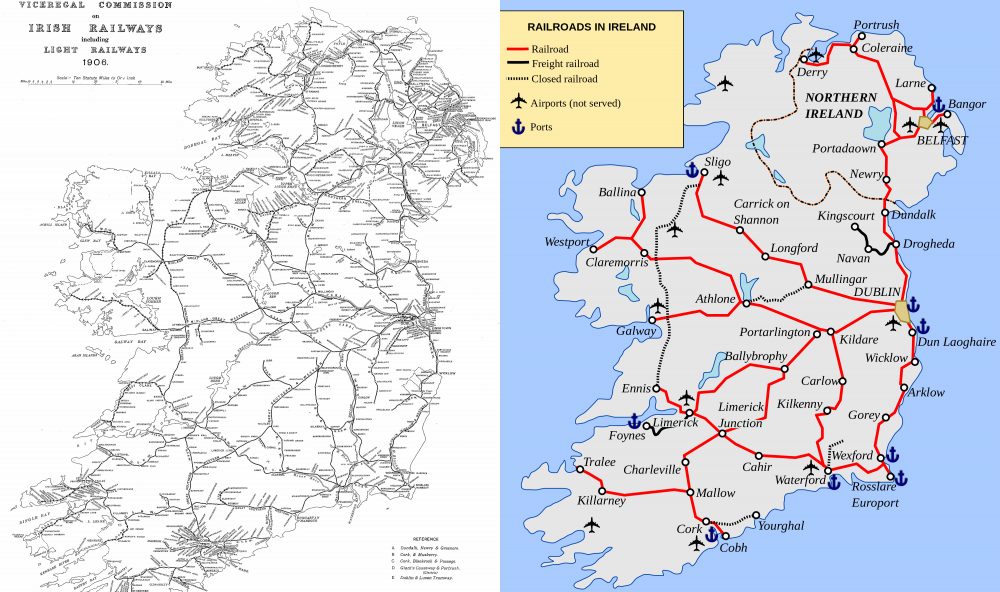 A high speed rail line from Dublin to the northwest of Ireland would address many of the most pressing issues facing Ireland today; the overheated Dublin property market, rural depopulation, and regional economic inequalities particularly impacting on border communities. It would mean that vast swathes of the country would be within easy reach of Dublin and its airport.

It would also increase the attractiveness of Dublin itself as a commercial destination, both by providing near-instant transportation from the city centre to its airport and by reducing the pressure on Dublin city accommodation costs, an issue which is beginning to put off foreign companies from investing there.

The map at the top of the post shows the type of route that could be considered. A tunnel would link Dublin Connolly to Dublin Airport, and from there the route would take in Ashbourne, Navan and Kells in County Meath, Virginia in County Cavan, Clones in County Monaghan, Omagh and Strabane in County Tyrone, Letterkenny in County Donegal and finally the city of Derry.

Assuming trains capable of running at 300 km/h and accelerating at 0.3 m/s2, timings from Dublin would be approximately as follows.

In terms of costs, recent high speed rail schemes in Europe have varied between €15-16m/km in Belgium, €4.7-23m in France and €7.8-20m in Spain; the extremely high costs per kilometre of HS2 in the UK aren’t an appropriate comparison due to the high costs of building railway lines in the London area.

Allowing a figure towards the top of these ranges (€20m/km), and allowing €1.2bn for the costs of tunnelling between central Dublin and the airport, a back-of-the envelope estimate for the 240km scheme would be around €6bn. Around 32% of the route would be through Northern Ireland.

A high speed rail line would help alleviate Dublin’s housing crisis and “level up” areas in the north of Ireland that have been left behind by the economic boom in the capital. The southern and western counties of Ulster have been starved of infrastructure investment for the best part of a century; it is time that this was addressed.