“… to work hand in hand with the elected representatives in the European Parliament, EU leaders in the European Council, ministers and members of parliaments in the Member States. The responsibility to clearly explain our positions to all those affected. The responsibility to ensure a high level of transparency in the negotiation. The responsibility to engage respectfully with UK negotiators, who represent a great country – one which has been part of the EU for 47 years. We have always stuck to this line: No aggressiveness, no punishment, no spirit of revenge. No frustration or impatience when the House of Commons was unable to agree on what kind of Brexit it wanted. We have always respected the ongoing debate in the UK, and we will continue to do so. Lastly, we had – and we still have – the responsibility to encourage a genuine public debate on Brexit: on how it affects the EU and the UK, and in particular Ireland and Northern Ireland. This debate hasn’t always been easy: Just take a look at my Twitter account!” 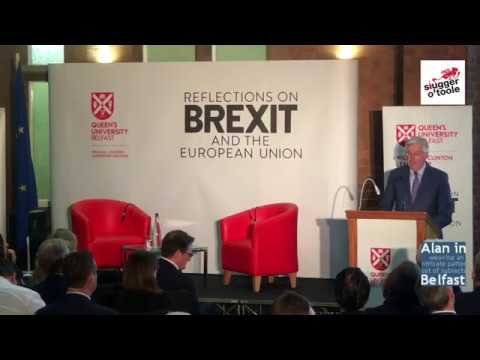 “Whatever agreement we reach on our future relationship, Brexit will always be a matter of damage limitation. Not one single person – from the UK or elsewhere – has ever convinced me of the added value of Brexit. At least, with the Withdrawal Agreement, which has now been ratified by the UK, we have managed to secure an orderly Brexit – for now. One that limits the destruction of value for our citizens and businesses. This is also our objective going forward.”

Barnier spoke about the EU’s birth.

“The European Union has always been a peace project. We are reminded of this today on Holocaust Remembrance Day. After years of devastating war and conflict, European integration transformed the meaning of national borders. The genius of the founding fathers of the EU was to focus on open trade and economic exchange as an element of peace, not just prosperity. This was true for France and Germany in the 1950s. It was also true when the Berlin Wall and the Iron Curtain came down.”

Earlier in the speech Barnier paid tribute to Seamus Mallon who had “played a fundamental role in the peace process”. Talking specifically about Northern Ireland, the Head of the Task Force for Relations with the United Kingdom said:

“The Good Friday Agreement allowed the people of Northern Ireland to identify themselves as British, or Irish, or both – and be accepted as such. You can choose to be British, of Irish, more Irish than British, and European. Irish, very British with a bit Irish and European, British themselves as Northern Or, indeed, Northern Irish and anti-European. This multitude of identities is a distinctive aspect of Northern Ireland. Similarly, Stormont is not based on the rule of the majority, but on power-sharing and compromise – an essential element of building peace. Others might think of Irish, or Northern Irish and European.

“And indeed, we missed Stormont during the negotiations on Brexit and Northern Ireland. Although I met with Northern Ireland’s leaders many times in the last years, the requests were always to meet separately, with one party. Never to meet together. This afternoon, I met with Sinn Fein’s Deputy First Minister, Michelle O’Neill, together with the DUP’s Economy Minister, Diane Dodds, representing the First Minister, Arlene Foster. So I am very glad to see the Legislative Assembly restored.

“Finally, I think it is fair to say that the fact that both Ireland and the UK were members of the EU was also very important in bringing stability to the island of Ireland, Because they shared the same rules and had a common trade policy. Companies could trade in a frictionless way without checks or customs procedures.”

On the Protocol on Ireland and Northern Ireland, Barnier explained that …

“… we have agreed on is indeed complex but operational. It allows Northern Ireland to remain in the UK customs territory and, at the same time, benefit from access to the Single Market without tariffs, quotas, checks or controls. The Protocol is not an insurance policy, but a workable system, built to last. And, importantly, it gives the elected representatives of Northern Ireland’s legislative Assembly the right to decide whether to continue applying the system or not, four years after it starts to apply. I look forward to Northern Ireland’s Executive playing a stronger role on this matter, now that it is up and running.”

He reeled off a list of advantages that the UK would be leaving behind, and added:

“we will also be watching closely to make sure that the UK government does the same for the more than 3 million EU citizens residing in the UK … The EU will never turn its back on its citizens. And the EU will not turn its back on Northern Ireland, even as it leaves the Union. The PEACE funding programme, which I was responsible for as Commissioner for Regional Policy, since 1995, supports peace and reconciliation and promotes economic and social progress in Northern Ireland and the Border Region of Ireland will continue. This is a sign of our commitment to peace and stability here. You can continue to count on our support.”

On the next set of negotiations:

“Negotiating the future partnership between the EU and the UK is another huge challenge. A new clock is ticking. 11 months is extremely short. Prime Minister Johnson has said he will not extend this period. This means that the UK will leave the Single Market at the end of this year. This is the UK’s choice. We respect it. And we will do everything we can in the short
time that this makes available. Never will it be the EU that fails on common ambition.

“But this is clearly a unique situation. Since its inception, the EU has been in the business of removing borders. Not creating them. Our aim has been to bring Europeans closer to each other – students, researchers, professionals, employees, entrepreneurs, pensioners.

Now, the UK wants a stricter migration policy that may apply to EU and non-EU nationals alike – possibly as early as 2021. Similarly, when we negotiate with third countries, our aim is usually to remove barriers to trade. We do this by aligning standards and regulations. The EU has even become so good at this that many of its standards and regulations have become the gold standard internationally. Our regulatory influence goes well beyond our borders because of the size of our Single Market. Our high standards are the reason why our trade and investment partners trust us. They are a core part of our competitive edge. Aligning with our standards may have a price. But the return is access to our Single Market.”

“It is not clear to me whether, when the UK leaves the EU and the Single Market, it will also choose to leave Europe’s societal and regulatory model. That is the key question, and we are waiting for an answer. Because that answer will be key for our future relationship. I hope that our UK friends are reflecting carefully on this issue. Because the UK cannot expect high-quality access to our Single Market if it insists on competing on State aid, social or environmental standards.

I would not want to be misunderstood: Competition between our economies is not a bad thing. Countries compete with each other, also within the Single Market. But competition needs to be based on common high levels of standards to make sure it is fair. Once again, the UK is faced with a choice. Our ambition – the EU’s ambition – is to create a close economic partnership: One that is based on a level playing field.

That is the only way we will be able to achieve a truly ambitious deal. A deal that that benefits both sides. A deal that is fair for our workers, for our taxpayers, our businesses and for the planet. A deal that – even if it will never match what we have now – lives up to our ambition to remain the best of friends and allies.”

Barnier listed some of the priorities for the EU 27.

1. An ambitious new Green Deal that will help to reconcile our economy with the planet, and turn the EU into the world’s first climate-neutral continent by 2050.

2. We will also do more to support Europe’s most vulnerable as we transition to a clean and digital economy.

3. We will increase funding for Erasmus so that more Europeans have the opportunity to live, study or work in another EU Member State. We know that education and research can be a game changer in tackling some of our biggest societal challenges upfront.

4. We will step up our efforts to protect our external borders.

5. And we will deepen cross-border cooperation on security – including, where possible, with the UK as a third country – to tackle gaps in the fight against serious crime and terrorism in Europe.

He finished his lecture:

“Allow me to finish on a more personal note. For many reasons, I regret Brexit. I will always continue to believe that we are better off together than alone – especially in today’s world. That is why I will remain a patriot and European. But I will also always have profound respect for the UK – its people, culture, great leaders – such as Winston Churchill – and its solidarity with the rest of Europe during its darkest hours. That is why at the beginning of this new chapter of European history, I would really like to wish the UK well – speaking here in Northern Ireland – as it embarks on this journey.”

Answering questions from audience members and journalists afterwards, it was clear that there was little room for leniency in the next set of negotiations. The UK has done a deal with the EU and it will now implement those commitments.

The ideal of frictionless trade is “impossible” according to Barnier, once again contradicting Prime Minister Johnson’s vision of “unfettered” trade. The BBC’s John Campbell explains:

Paraphrasing what I heard: the UK can no longer dip its hand into the EU sweetie jar as those treats are only for the 27 members.

Anyone hoping for a softer edge to Brexit may think again.