Life-long Europhile Jane Morrice launched her colourful campaign this morning in The MAC. Attended by friends and some Women’s Coalition stalwarts, the sea-swimmer, former journalist, MLA and head of the European Commission office in Belfast had decorated the venue with European flags, bunting, flowers as well as yellow and blue balloons. 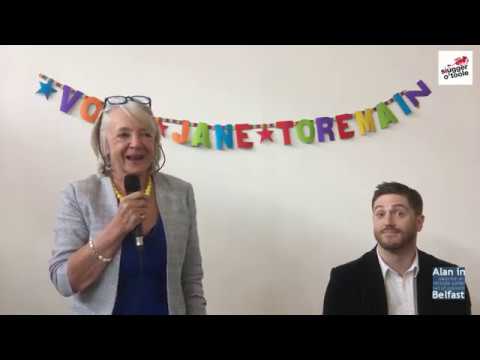 She regrets that the UK were “cutting the cord and turning our back on 500 million people we never really saw as friends”. Instead she wants to press for a People’s Vote on any deal with a clear option to indicate a desire to remain in the EU, and for any deal to include special recognition of Northern Ireland, essential she says, due to its unique frontier and people’s right to EU citizenship.

“After years outside politics [Brexit] has brought the fire back to my belly. I profoundly believe that Brexit poses the most serious threat to political, economic and social stability in Northern Ireland, and I feel it’s my duty to stand against it.

“Brexit doesn’t just shut the door on the best trade deal we can have in Europe, it slams the door in the face of opportunity for our younger people to work, to study, to live and learn from the European civilization, which is part of our very being, of our essence. And I think it’s important to say now that Europe isn’t just about money and markets, but that’s all everyone seems to talk about.

“With all the talk also of independence in Scotland and a border poll in Ireland, Brexit also risks the breakup of the UK. The chaos created since the referendum is proof that we are totally unprepared for the consequences of Brexit, hard or soft. And we haven’t even left yet.”

Later she added “I’m not saying that Brexiters were wrong to vote the way they did. I’d probably have voted Brexit if I’d believed all of the said, you know false promises, misinformation. I’ve described it as we were sold a pop, putting it mildly.”

Morrice says that she is “promoting the power of positive politics” (somewhat ironically) with three campaign pledge ‘no’s: no negative campaigning; no posters and only a few leaflets; and no to Brexit.

Baroness May Blood spoke to endorse Morrice, before exiting the platform to attend an integrated education fundraiser.

“I’m here because of Europe. I’ve always believed we should have stayed in Europe. I think it was the biggest mistake when people voted to leave, which in Northern Ireland they didn’t. On the Shankill we benefitted greatly from Europe and from the influence there …

“I’m a community worker. I work at a grassroots level and I believe if Jane was elected that’s exactly where she would work. She would work in our communities; she just wouldn’t fly to Europe and we wouldn’t hear of her again …

“So please get behind Jane. She has our well-being at heart. She, as Baroness Blood said, intricately knows our relationship to Europe. She understands the mechanisms. She has built relationships with the people. And most of all I’d say get behind Jane because her motivation comes from heart: she’s doing this because she wants Northern Ireland to flourish and grow.”

Dubbed the “queen of the mixed metaphor” when working at the BBC, Morrice summarised her campaign as she drew her speech to a close:

“operating on a shoestring; flying by the seat of my pants; and now ready to get my show on the road”

“Where’s the BBC?” asked Jane Morrice at the start of her speech, later launching into a treatise on the public service broadcaster’s “40 years of failure in its public service duty to educate and inform the public about what is the European Union”.

The DIY approach to the campaign launch – with folksy banners, an initial leaflet (with the imprint address handwritten on the bottom) – was balanced with oodles of enthusiasm.

But will it cut through the existing party campaigns – which will rely on posted leaflets and media appearances rather than door-to-door canvassing – and make any impact?

Just two and a half weeks before the election, with a tiny support team that would fit into her beloved powder-blue Morris Minor, the first most people will hear of Jane Morrice is when her free campaign leaflet is dropped through their letterbox by the postman.