There was a decent number of SDLP members and MLAs at the Ard Fheis, with members curious about the event and MLAs enjoying liaising with TDs and Senators. Despite the partnership being a few weeks old, you can still detect at a membership level some uncertainty about how it all will work in practice but many were happy at the size of a Fianna Fáil Ard Fheis and the general buzz around the Citywest Hotel.

The centrepiece of the day (from a partnership perspective) was the panel session on Brexit which feature the SDLP Leader, Colum Eastwood.  The session was well attended, delegates queued up outside to enter the room and all stayed to hear the various contributions from the main panel on Brexit (speakers included Phelim O’Neill, Dan O’Brien, Lisa Chambers, Barry Andrews and Sean Haughey). 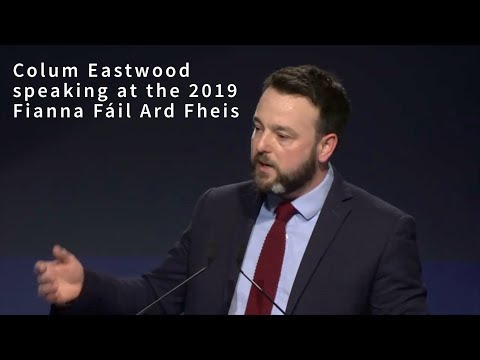 Eastwood received a warm welcome from delegates as he outlined his message about Brexit, restoring devolution and a New Ireland. He also directed criticism at Sinn Fein over abstentionism and calls for a border poll.

Brexit is now the ever-shifting water table beneath our feet – it is unsettling all of the political ground which rests upon it.

A hard border in Ireland threatens to bring existential threats to many of our industries – it threatens to position us as a permanent economic backwater.

This is particularly true for communities west of the Bann and along the border – communities already economically neglected.

All of us instinctively know that this can’t be allowed to happen but all of us must equally understand the reasons why.

In 1998 these two parties, this island, and all our people chose an agreed future.

It was primarily based on openness – including an open border.

So we must be clear and calm in stating that any hardening of the border, will be a deliberate violation of our political process by the British Government.

They have simply no right.

In Northern Ireland, the Good Friday Agreement is sovereign.

Both of our parties know this truth – we were the Agreement’s architects – we built it.

That Agreement belongs to the people of Ireland and we are the only people with the right to change it.

On a New Ireland the Fianna Fáil partnership;

The new partnership between the SDLP and Fianna Fáil is based on a common analysis that business as usual is not an option.

Brexit encompasses change on every level.

The current political stew is bubbling with issues of identity, belonging and culture – it’s no longer just the economy, stupid.

Brexit has changed everything in this regard – and will continue to change everything.

We are coming together to shape the change before us.

People across this island are also alive to that change and are speaking openly about it.

As we approach the centenary of partition – a triumph for some and a tragedy for others – meaningful reconciliation between the peoples of this island must remain our top priority.

A new and reconciled Ireland will only ever be built by fully recognising the changing island of today.

For our young people especially, the picture of their world is no longer reflected in the murals of our past.

Old political certainties and old majorities are no more.

On an island of new minorities the only option is to build a broad coalition for change.

That changed Ireland won’t be built upon the rubble of our history – it will instead be based on the values we invest in modern nationhood.

The purpose of a New Ireland can’t be guided by a blind obsession with historic wrongs – it should be about creating opportunity for our emerging generations.

A New Ireland capable of delivering prosperity and fairness for all.

However, we will only succeed in reaching that New Ireland if we first provide it with definition and detail.

And no referendum should be called until that work is done.

There will be a special place reserved in hell for those who call for a border poll in Ireland with no plan and idea on how to actually deliver it.

is a convenience but not a necessity.

There is no hope of reconciliation without an Assembly in Stormont.

There is no hope of delivering integrated economic and social progress across this island without an Assembly at Stormont.

There is no way of fully protecting our people against the devastating consequences of Brexit without an Assembly in Stormont.

And for any real republican, there is no pathway towards a New Ireland without an Assembly in Stormont.

Both the SDLP and Fianna Fáil are coming together to ensure that we return to the vision we imagined and built some 21 years ago.

We will fight to ensure that government returns to the North and that our people are no longer left voiceless and powerless.

On my journey down this afternoon I was looking through the clár for this Ard Fhéis.

This evening I noticed that two events will be celebrated and commemorated – the establishment of the First Dáil and the legacy and life of Taoiseach Sean Lemass.

There is something appropriate in the fact that historic commemorations and current historic events are chiming and converging.

The Irish and British peoples across this island can retreat from each other or we can again choose to work, live and govern together.

The speech was well received by delegates with a good number of interruptions for applause and a standing ovation at the end of it from delegates. It was followed by numerous speakers from the platform welcoming the partnership and praising the new arrangement.

For the SDLP MLAs and members in the hall, they would likely have come away more confident about its future prospects with comments such as those from European Candidate, Barry Andrews who spoke about the cooperation that can take place at a European level between the parties.

Are there still issues for this? Of course, we still don’t know how aspects of this will work and there is a danger that it becomes too heavily focused on what Sinn Fein is doing and not about what this partnership is supposed to achieve.

This Ard Fheis, did help demonstrate why being plugged into a bigger political force can be helpful but again, how that works in practice still needs to be developed.