Catherine Leonard is a recent graduate from Ulster University’s Master of Science degree in Communications and Public Relations and was one of the eighty members of the Citizens’ Assembly that met over two recent weekends to examine the policy area and bring forward recommendations around social care for the elderly.

There is a strong feeling of negativity in the Northern Ireland air at the moment. Away from the stress of Brexit, a couple of weekends ago marked the end of Northern Ireland’s first ever Citizens’ Assembly.

I was familiar with the concept and knew that the Republic of Ireland had used a Citizens’ Assembly model to discuss a series of issues. However, I wondered whether a Citizens’ Assembly would be more problematic in Northern Ireland due to the polarising nature of our politics.

Before I decided whether or not to take part in the Citizens’ Assembly I researched what local commentators had been saying about the idea. I wasn’t surprised to see some negativity. After all, where would Northern Ireland be without cynicism? (It’s probably best not to answer that rhetorical question.) Some of their remarks reminded me of the criticism of the new Glider buses in September at the point they were being introduced.

We have a tendency to lambast things in Northern Ireland before they even have a chance to get off the ground. It was frustrating to see this genuine attempt to get ordinary members of the public to participate in the democratic process be criticised so casually.

We are in the middle of a political crisis in Northern Ireland. Any attempt to get the public to reengage with politics here should surely be welcomed. Democracy is not just about electing someone every four years, and only letting political commentators and party members voice their opinion in the interim. The general public should always be at the heart of the democratic process.

The topic for discussion over the two weekends was ‘Social care for the elderly’. Before the process began, it wasn’t an issue that I had thought about in any detail. My knowledge was limited to family experiences. I wondered if my young age would be a problem in our deliberations. Wouldn’t many of the older participants have much greater knowledge of the current system than I did? Would this cause tensions? That my age never resulted in my opinions being treated any differently came as a relief.

For me, the best aspect of the Citizens’ Assembly was the fact that all parts of Northern Ireland were represented. The inter-generational contact over the two weekends was encouraging. The idea that young can learn from old and vice-versa is clichéd, but in our case it was true. We all came from different backgrounds, but we shared one common goal throughout the whole process: to come up with a set of recommendations for the social care system. 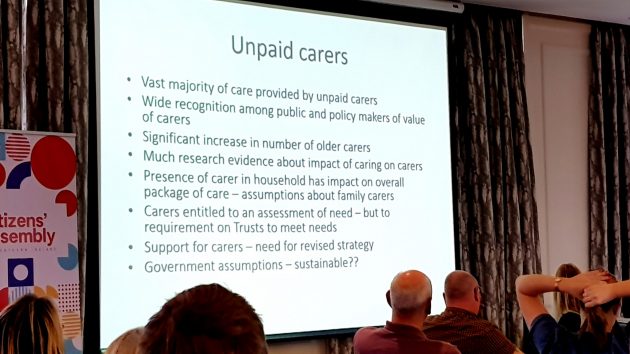 The model used ensured that all eighty members were given an equal platform. How we chose to engage was completely in our hands. There were some fraught and tense conversations. What was striking about this process was the respect shown by the vast majority of members to each other, and the fact that the majority of disagreements were resolved amicably. (Something our elected representatives could have learned from if more of them had taken the opportunity to attend and observe the Citizens’ Assembly.)

My main motivation to take part were my feelings towards the current political situation. I find the impasse frustrating to put it politely. The Citizens’ Assembly offered the opportunity to do something constructive during this worrying time. While I recognise that without a return to Stormont on the horizon that the entire process may look like a waste of time to some people looking in at this from the outside, but I would implore them to look at the bigger picture. We will get some form of Government back, at some stage, and they will be able to take a look at our recommendations. The Department of Health is already studying them.

This experience highlights to me that a group of people from different backgrounds can come together in Northern Ireland and come up with real solutions to important problems. It shows that there is an appetite for wider political engagement amongst the general public.

Constructive cooperation across the divide is important, now more than ever. That ordinary members of the public can gather to discuss and deliberate on a difficult topic during a particularly challenging time for Northern Ireland politically is inspiring.

I would urge all MLAs to look closely at what comes out of this pilot, and to look towards funding future Citizens’ Assemblies in the future.