The SDLP gathered for the first time in over two years for their conference at Titanic Belfast. In what has been a political year of many highs of lows for the party it was a relatively low key affair for most of the morning.

Delegates (those who turned up) debated a steady stream of motions on welfare reform, environment and policing. The only potentially controversial motion that was up for debate was one regarding the naming of parks after actors from the Troubles. Delegates Seamas de Faoite and Brid Rodgers spoke about their opposition and argued that the SDLP should be seen to be ambivalent about such issues.

On welfare reform, the party Deputy Leader Nichola Mallon led spirited exchanges as various delegates from across the party told stories about the number of people being impacted by various welfare changes. This proved to be one of the more interesting sessions.

The main afternoon set piece was from the Deputy Leader Nichola Mallon who reminded the conference about the Good Friday Agreement;

I don’t mind telling you that 20 years ago when our predecessors in this party were negotiating our way out of a seemingly endless cycle of violence and despair, I was a young teenager, only 18 years old. And to be honest I thought politics was little more than a textbook subject to be taken at school. Until that day in April 1998 – when I saw for the first time that politics was not something to be merely studied – but something to be lived.

On that day – I saw the power of politics to change lives – to offer a different future for my generation. That’s what ignited the fire of politics in me and sparked the burning desire to be a voice for that generation, for north Belfast, and for the SDLP.

She talked about her ambition for Northern Ireland;

I have two daughters, not even school age yet. There have been times when I have questioned whether it is fair on them to stay here, where politics is broken and at times society looks to be broken too.

Shouldn’t we just move away to a place where everyone is equal, cultures and identities are respected and tolerance of ‘the other’ is seen as a virtue rather than a concession?

But moving away isn’t my ambition.

While I respect those that make that decision, my choice is to stay in the country where I was born, and to work to make it a better place.

My choice is to roll up my sleeves and get stuck in on the ground, where vulnerable people need help with everyday problems.

My choice is to go to the negotiating table, even when others stay away, and work to come up with imaginative solutions to our political stalemate.

My choice is to work in partnership with the Irish Government to ensure that the chaos of Brexit does not result in a hard, physical border on our island, the kind we left behind a generation ago.

My choice is to do what I can to give voice to those who prefer bridges rather than borders, who can be proud in their own identity and relaxed in the company of those who claim a different allegiance.

My choice is to live my life and go about my politics the SDLP way.

The DUP and Sinn Fein were also the focus of attack;

That is the result of the zero sum game currently being played out by the DUP and Sinn Fein.

That is the result of Arlene Foster choosing to walk away from a negotiated agreement rather than face down the Westminster led rump of her party who continue to want no sign of Irish culture or identity about the place.

And it is the result of living without hope and without a locally accountable Government.

Failure begets failure, despair leads to more despair and people finally switch off politics.  Right now, who can blame them?

On Brexit and the British Government;

That approach could not be further from the extremism and chaos that characterises the UK Government.
In campaigning for Brexit they totally ignored the Ireland question.

They thought nothing of it, and they cared even less.

Even our own home grown Brexiteers in the DUP and the Unionist Party appear to be blind to the economic, security and social consequences of a return of a hard border.

By putting ideology ahead of political pragmatism they won’t even consider the economic opportunity that would be opened up by Northern Ireland remaining part of the Customs Union and Single market.

Their selfish pursuit of ‘the Union’ at all costs leaves us all poorer. Bizarrely some in the DUP even take pride in their ‘Brexit at all cost’ approach.

It’s a reckless and dangerous road.

And on the difficult journey ahead through the negotiations, I would far rather have the Irish Government as my travelling companion than Boris Johnson and David Davis.

This was Colum Eastwood’s second speech as party leader and the first since his key electoral tests in 2017.

Our only focus should be breaking the cycle of failure.

Our only focus should be getting back to the Good Friday Agreement.

Conference, I can genuinely only see one solution that has any hope of ending the current impasse.

Too often the mistake is made of believing that our political process is only internal to Northern Ireland.

If a vacuum is allowed to persist, people deserve to know the truth as to what that will actually mean.

The statement, often repeated these days, that Direct Rule is not an option is simply ridiculous.

We have to be honest.

A budget delivered in Westminster is not a version of Direct Rule – it is Direct Rule.

After all the years spent trying to bring powers back to this island, the current failure of our politics has returned them all to a dysfunctional Tory Government in London.

In that continuing vacuum, don’t believe any politician – myself included – who tells you they can deliver real and radical change to the social and economic fabric of this place.

As of now, no party leader in Northern Ireland can credibly promise you a manifesto of local change – we simply don’t have the power.

To borrow a phrase – until we collectively take back control of our own affairs – we will be left unable to shape the political change that is so badly needed.

If the British Government continues to ignore that simple logic – we must maintain full economic alignment across the island and into European markets.

As set out in the December EU text, this must be the agreed backstop.

We can’t let it slip until the EU Council meeting in October.

The backstop is not our first choice, but it is our ultimate protection.

The only people who will actually end up delivering that backstop are the hardened Brexiteers who are determined to inflict economic self-harm.

Anything short of these proposals, any hardening of the border, will be a deliberate violation of our political process by the British Government.

They have no right.

In Northern Ireland, the Good Friday Agreement is sovereign.

That Agreement belongs to the people of Ireland and we are only people with the right to change it.

There are increasing numbers of politicians on both islands carelessly queuing up to rip it apart.

We cannot and we will not allow it. 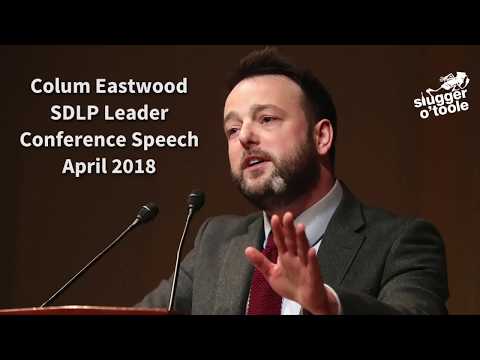 As with all parties the lack of an Assembly have taken some of the importance out of the conference. Motions were largely agreed and rarely challenged from the floor which made those sessions appear like they were going through the process of getting necessary business over and done with.

Taking the abortion motions out for a future conference in May was a mistake, as with the 8th Amendment referendum coming up it neutered the impact of the conference somewhat. When one delegate rose to his feet to proclaim the Good Friday Agreement “dead and buried” it gave us a brief moment of debate and a different point of view.

As for the leadership team speeches- Nichola Mallon gave a pointed critique of the current situation and was well received by delegates. She a clearly embraced the role of Deputy Leader and constructs her arguments with a degree of poise and confidence.

For Eastwood, he delivered a strong speech that covered a range of topics from Brexit to restoring devolution. He  was able to keep the audience interested and the applause at the end was genuine.

Hurdles remain though, what will the party decide on abortion rights at its special conference in May and will questions about the party’s very existence linger going into the future.

Eastwood and Mallon are strong performers, there is no leadership problems for this party, but the other issues around the brand/place in Irish politics going forward are the main issues. At moments the membership seemed a tad flat throughout the day.  Yet, both leaders performed well today but can this be translated into votes?