Unsurprisingly, the Sinn Féin leader did not see Brexit as any form of positive opportunity and used her prepared remarks to once again dismiss the idea of a transitional Assembly during the ongoing political stalemate, saying that it would give “a veneer of accountability to direct rule”.

Instead the British Irish Intergovernmental Conference should be convened to “produce … a pathway to bring forward the legislation and resources to secure these rights and implement the agreements”. 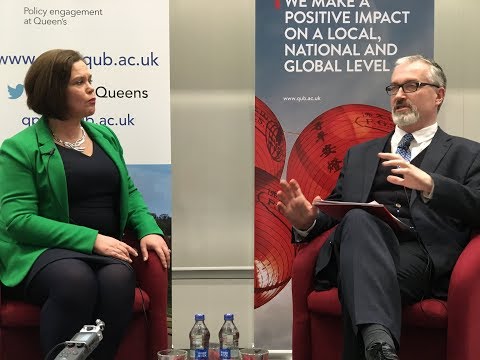 “Thank you for the invitation to address you this evening. Let me be direct – I don’t believe that there are any opportunities in Brexit. It runs contrary to our agreements, our economic interests and the rights of all our people. While there are undoubtedly major issues and legitimate concerns with the direction of the European project.

“Brexit is not the answer. Brexit reflects the inability of some to reconcile themselves with the present and to plan for the future. Those behind Brexit glory in nostalgia for the past; an imperial past that is gone, and that is never coming back.

“Brexit is fundamentally about the failure to recognise that our world has moved on and our
world has changed. And that is what I wish to address tonight. Change, the process of change and the challenges of shaping change.”

She picked up on a quote from Senator George Mitchell and referred back to it several times during her address.

“I recently attend an event in the Library of Congress in Washington. At that event the former Chancellor of this university, Senator George Mitchell said something profound. He said that ‘life is change’. That is a very powerful and profound statement of truth.

“It’s true in our personal lives and it’s true in politics also. Nothing stands still, nothing can be taken for granted and everything we do provokes a reaction. We have it in ourselves to be leaders of change.

“One hundred years ago women won the right to vote. In the 1918 elections Irish Republicans swept the boards in what became known as the Sinn Féin election. The people voted for independence and freedom. The first woman elected to Westminster: an Irish Republican abstentionist MP, Constance Markievicz. And at that time the Sinn Féin MPs turned their back on Westminster and when the first Dáil was convened in Dublin in 1919.

“This democratic vote of 1918 was ignored, and conflict ensued and partition was imposed on Ireland. Partition delivered a ‘carnival of reaction’ just as James Connolly predicted. In the north it delivered a gerrymandered Orange state, with an in-built unionist majority – a cold house for Catholics. And in the south, a free state where Home rule was Rome rule, where theocratic laws and corrupt politics held sway.”

“But those days are over. Ireland has changed. Ireland is changing. The North is changing. Society and politics can no longer be viewed through the simple prism of just Orange and Green. We have An Dream Dearg, the reds of the Irish language campaign. A campaign for equality spearheaded by a new generation of Irish speakers. Proud of their culture and promoting the language for all.

“We have the rainbow of colours that make up the marriage equality campaign. A new progressive generation is coming to the fore, challenging old orthodoxies. This will be seen in the vibrant Repeal the Eighth campaign, a campaign about trusting women. Modernity beckons; change is all around us.

“The perpetual unionist majority, the very foundation stone of this state is gone. The demographic trends can’t be missed. While there are those who may want to stall progress, to gerrymander boundaries, to block rights, they can’t stop the process of change.

“Change can be agreed, it can be planned or it can be reckless and chaotic. But it cannot be stopped. I believe we have a responsibility to create a planned and agreed process of change. That is why we need the institutions at Stormont up and running.

“That is why we need the foundations of the Good Agreement, equality, rights and respect back in place. And that is why the process of reconciliation is crucial because we all need to move forward together.

“You all know that we are in a tough place at the moment. I know that our changing society is difficult for many including many within Unionism.

“For over 13 months we negotiated with the DUP, we reached an accommodation with their leadership. The draft agreement, while not meeting all our proposals, presented progress and provided a basis to re-establish power-sharing. The DUP leadership were unable to deliver the draft agreement. I say this not to recriminate but to record my deep disappointment.

“The issues at stake, the rights of Irish Speakers as agreed in St Andrews, the legacy mechanisms agreed in Stormont House and the right to marriage equality – available in the South and across Britain – all of these issues remain. These rights cannot be further delayed because a right delayed is a right denied. It is time to move on, to implement the agreements and to secure these rights.”

She turned to specifically address the Alliance suggestion – supported by the DUP – of a shadow Assembly.

“The governments must secure these rights, consistent with the agreements, to loosen the political deadlock and provide a pathway back to genuine powersharing. This a pragmatic and common-sense approach. This is a challenge to a British government that is dependent on the DUP. It is also a significant challenge to the DUP, to embrace the spirit of powersharing and full equality. I believe the powersharing institutions are the best, the only option to chart a way forward together and to navigate the big societal change that we face.”

“As our society changes, so reconciliation and respect come to the fore. Because without these the future is continued segregation and polarisation. And that is in nobody’s interest. We need a society at peace with itself. A society that reflects our common humanity. A society that respects diversity and embraces difference. A reconciled and inclusive society. I believe that reconciliation is as much about shaping the future as it is about healing the past.

“It is a year since we lost Martin McGuinness. As Sinn Féin leader I want to build on his work in reaching out the hand of friendship and understanding. I have no interest in fighting the battles of the past. I see no value in the blame game. Nobody should be asked to forget. Nobody should be expected to forgive if they cannot.

“There is no one historical narrative or simple truth. We must only agree that what happened in the past must not happen again. We must be able to disagree on some things but also be able to move forward. To a society where you can comfortably be Irish or British or neither or both.

“Life is change and Ireland is changing. Unionism needs to engage with the process of change. To think, the unthinkable. Many unionists will privately acknowledged change. That acknowledgement must now find public expression. So let’s plan a future for all our children.

“I am an Irish Republican. A united Irelander. A most unmanageable of revolutionaries. A believer in the unity of all our people in all our diversity. I believe that we can find common ground and build a new, agreed and united Ireland.

“Unionist citizens, communities and their identity must be a central component in the building of a new and united Ireland. Unionists must have the same sense of ownership as Irish nationalists and republicans. The New Ireland we seek to build must be their new Ireland too.”

“Some may say I’m a dreamer. To John Lennon fans that might mean something! You might say that the ideas I’ve set out are fanciful. I say these ambitions are grounded in hope and confidence in our collective strength.

“This institution [Queen’s University, Belfast] received its charter 173 years ago. This institution has borne witness to the changes in Belfast, and our shared history. A century ago the first woman MP was elected. Thirty years ago conflict was raging, with no sign of ending and no notion that unionism and nationalism, the DUP and Sinn Féin would share power. Today the conflict is over, powersharing will return and it is time to start the healing.

“The question for us is where do we want to be in 30 years time. We have the opportunity and I will say the duty to put things to right. So we need to tackle sectarianism head on. And I want to be clear, by the way in saying this, I do not mean disrespecting people’s beliefs, cultures or churches. Religious freedoms, civil liberties and separating church and state are essential dynamics of an open democratic system of governance. They are also the building blocks of a new Ireland.

“Our laws, our constitutional and cultural frameworks, our public policies must be built on the fundamental equality of every single citizen. So the choices we make today, including around Brexit, will shape our future.

“George Michell said, life is change. So let us prepare and shape that change. Let us imagine a new and united Ireland. A reconciled and inclusive Ireland. A modern Ireland in which citizens have equal rights and respect. An Ireland where identities British, Irish and others are shared and celebrated. This is the challenge of our generation. It will call for patience and generosity, ingenuity and courage. And so my friends may we possess these virtues in abundance for the journey ahead.”

Asked about a United Ireland, the Sinn Féin President suggested that nothing was off the table when discussing what a new Ireland would look like, even the flag.

Initially asked about bi-lingual signage at Queen’s University, she went on to describe some of the media commentary around Irish Language Act as “off the wall”. She recommended that unionists who were scared about Irish listen to other voices in their own community. “I point you to a very fine woman – Linda Ervine – who is a lover of the language, and certainly not a republican like me”, and went on quote her tweet about driving through Wales.

Brian and I driving through Wales and I’m loving all the bilingual signage. Haven’t noticed any hollowing out of my Britishness so far.