Conjuring the image of the latté or cappuccino-drinking cosmopolitan is one of the most tired political ruses in the English-speaking world. Why is it back in vogue again in the Brexit era?

[dropcap]W[/dropcap]ednesday night, the pro-Brexit provocateur Julia Hartley-Brewer tweeted a link to a Guardian article about a leaked Home Office plan to deter EU immigration, and commented: “You can almost hear Guardian hacks worrying about who will be serving them their skinny lattes in a few years time…” 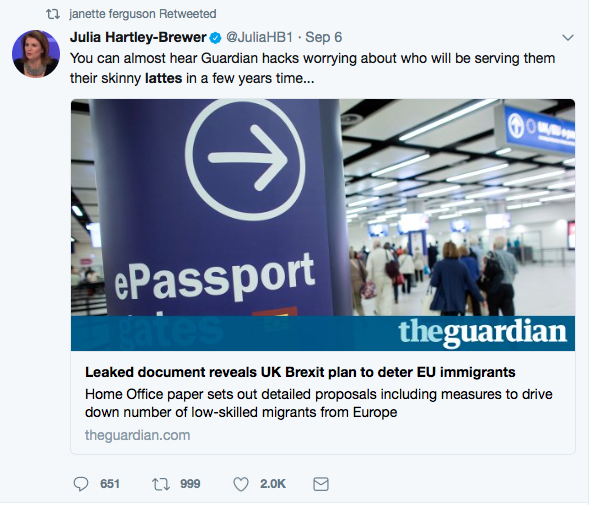 Blaming latté drinkers is the kind of grievance peddling we’ve become used to in the Brexit era. A media personality or politician, attempting to align themselves with a perceived British everyman/woman, has a go at the mythical liberal elite, using the language of espresso drinks. Why does Hartley-Brewer, a self professed skinny latte addict herself, who frequently tweets about her fondness for the low-calorie espresso drink, indulge the conscious hypocrisy of such blether? As she later tweeted, “To take the piss out of Guardian journalists’ metropolitan elitist outlook.”

Right-wing political commentators and politicians have long used espresso-laced putdowns to demean liberals and lefties. Jon Kelly has a great piece on the BBC News Magazine site where he unpicks the history of the association between lattés and liberals and goes back to a 1997 David Brooks article that first put “latté liberals” into the political ether. Kelly then looks to the 2004 Democratic primaries when the fiscally conservative Club for Growth ran a famous attack ad on candidate Howard Dean. In the ad, the Vermont senator is associated with a “tax-hiking, government-expanding, latte-drinking, sushi-eating, Volvo-driving, New York Times-reading, body-piercing, Hollywood-loving left-wing freak show.” The ad cemented in the English-speaking political imagination the image of the elitist and out of touch liberal cosmopolitan latté drinker. It helps, says Kelly, “that the words ‘latte’ and ‘liberalism’ alliterate.” 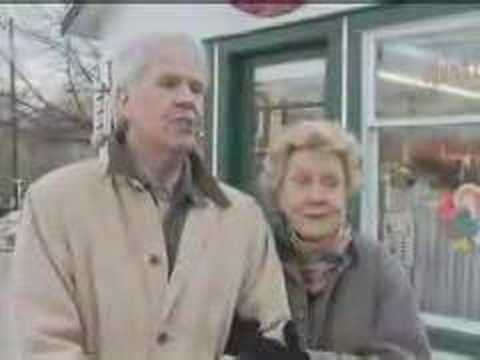 In Britain, on the pro-Brexit right, the latté ruse is deployed to render Remain supporters (and liberals and lefties in general) as out-of-touch, effete snobs. So much of who we are in the modern world is defined by our consumer choices. When the pro-Brexit right says those against Brexit drink lattés or cappuccinos—and the culprit always emphasises the Italian nomenclature—it is a claim about the drink and the drinker’s un-Britishness.

What makes the whole latté ruse so ridiculous, if not slightly pernicious, is that it’s a known lie where the teller and the listener both agree to disregard truth for the emotional zeal that comes with pretending it’s real. The important thing is that the language is always more important than reality. In the UK, over 70 million cups of coffee are consumed per day. People across all class and geographic backgrounds in the UK enjoy a cup of coffee. What matters is how the latté ruse evokes a story of them and us. Whether people drink lattés or not actually doesn’t matter.

Tory eccentric Jacob Rees-Mogg’s recent jibe about Labour’s Brexit policy announcement makes the point well. Responding to Shadow Brexit Secretary Keir Starmer’s recent announcement that Labour would pursue staying in the single market and customs union during a transitional phase, Rees-Mogg said Labour had pitched to “cappuccino drinkers in metropolitan areas.”  That Rees-Mogg is pictured on his own website in front of a cappuccino machine at a coffee shop in Radstock in his own constituency, and captioned as an “espresso enthusiast,” makes no difference at all. It’s the grievance narrative that matters.

The argument being advanced from voices such as Rees-Mogg and Hartley-Brewer through the latté/cappuccino ruse is layered, but at the heart is a claim about British identity. It goes something like this. The Brexit referendum was a vote against a global paradigm that sees rootless, liberal cosmopolitans ruling across national borders. Congregated in metropolitan centres, these cosmopolitan elites have lost touch with common British values and tastes. Normal, tea-drinking, patriotic Brits in small towns across the country, working average jobs, pinching pennies to raise families, want their country back from the latté-sipping liberals who have upended their traditional way of life. And the latté is shorthand for the entire myth.

Thomas Frank in his seminal book What’s Wrong With America? calls this the latté libel, which he defines as a rhetorical maneuver insinuating that liberals are “identifiable by their tastes and consumer preferences and that these tastes and preferences reveal the essential arrogance and foreignness of liberalism.” The larger narrative that encapsulates the latté libel took decades of careful work, but by 2004, when Bush beat Kerry, it was clear right wing strategists had altered the political shape of the country, transforming traditionally radical, left-wing areas in the flyover states into solid “red states,” ie Republican strongholds. The right successfully changed the narrative and frame of debate from that of an unequal economy to one where liberals, with their tastes and values, destroy jobs, communities, and traditional family structures.

Using this story, the right gets low income voters to vote against their economic interest. The mechanism is fairly straightforward. Create a powerful sense of belonging by telling the story of an in-group under threat from a made-up, but plausible enough liberal elite. Create monsters and archetypal enemies. Then position yourself as a champion born from the people’s will. This has been the Republican strategy my entire adult life, and last year, Trump just took it one step further, and did it better than the GOP establishment. Brexiteers tell the same myth, just slightly recast. It’s fictitious, and knowingly hypocritical, but it works. It’s the meat and bones of demagoguery, a politics that, as Jennifer Mercieca describes it, “feeds on popular prejudices, makes false claims and promises, and uses arguments based on emotion rather than reason.”

It should be said that coffee aspersions also come from the left. Remember Andy Burnham’s hot take from April on new Tory immigration proposals? “Bit bizarre,” he said, “hearing these right-wing calls for a ‘Barista Visa’. God forbid the idea of waiting longer in the morning for their posh coffee.” There was also that weird moment when Labour leadership contender Owen Smith, in a botched bid to seem authentically working class, pretended not to know what a cappuccino was at all. Never mind that he participated in something literally called “Cappuccino interviews” on the BBC ahead of the 2015 election. Vice has a good piece on coffee and politics in which Tom Wyman makes a convincing point about Labour politicians participating in a well-versed web of tropes that project an “authentic” way of being working class (hint: lattés don’t make the cut).

Both Hartley-Brewer and Rees-Mogg love espresso drinks themselves and know very well how popular espresso drinks are in town, country and city across the UK. When I lived in rural County Antrim, farmers would roll up the small high street in tractors, pop into the coffee shop, then drive off back to the farm. When I worked at a Belfast call centre for minimum wage, half the staff got through their 10-hour shifts by knocking back sugary Costa Coffee drinks. When I worked as a builder on construction sites in Boston, the crew loved mid afternoon Dunkaccino breaks. Nurses, taxi drivers, builders, the list goes on and on. In the real world, we’re all knocking back coffee. Liberal elites? Espresso is the fuel of the shift worker no matter what the Brexiteers and phony class warriors say. Long live the latté.