Rejecting the choice between Assad and ISIS, Syrians living in the UK argue a third way is possible, and seek support in reclaiming the dream they rose up for in 2011: a democratic and free Syria.

[dropcap]B[/dropcap]efore conflict overcame his native country, Amer Masri left Syria to study genetics in Edinburgh. “You know, like Dolly the Sheep,” he jokes. Living in the UK, he learned about democracy, and what it felt like to have the freedom to speak out, something systematically denied to the Syrian people by the Baathist regime for more than forty years. This exposure to democracy was enough for Bashar al-Assad’s intelligence service to deem him un-loyal and a threat to the regime.

Returning to Syria to visit family, he was detained by the authorities, and taken to “have a coffee at my aunt’s,” a Syrian euphemism for imprisonment. He was moved to the intelligence headquarters and thrown in with the political prisoners, a consortium of doctors, pharmacists, lecturers, lawyers, and other members of civic society.  Interrogators told him he had spat on the plate from which he was fed, and accused him of being a UK spy. They beat the soles of his feet with an electric cable until they no longer had feeling and threatened to rape his wife and mother in front of him.

Many family members of Assad’s political prisoners scour through photos of corpses, smuggled out of regime prisons, to gain the only form of closure they’ll ever get. Nasri was lucky. He managed to bribe a judge and extract himself from the Court of Justice. He returned to his wife in Scotland, who had been working with local MPs to secure his release. The Assad regime cut funding for his PhD, but the University of Edinburgh stepped into help him complete it. In October, he shared his experience at the SNP annual conference, and now advocates for Syrian freedom as part of Scotland4Syrians. 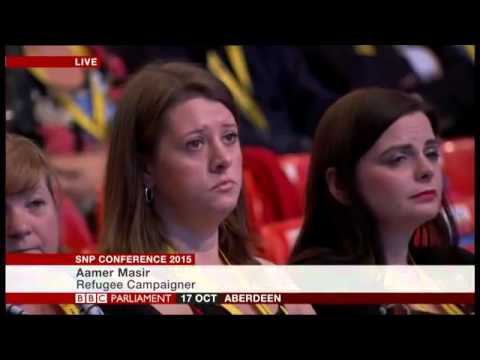 I heard Masri speak on Saturday at an event hosted by the Syria Solidarity Movement called “Together for Syria,” held at the School of Oriental and African Studies (SOAS) in London. Masri’s was one of the many stories of resistance and survival told to those in attendance; but what was emphasised over and over again by the speakers, was that for every story you hear, there are tens of thousands, just like them, that you don’t. Stories of children, killed for the offence of political graffiti, whose corpses return home with bruises and missing finger nails. Stories of men, who go to the grocery store to buy bread, and never return home. Stories of girls, raped and tortured. Thousands and thousands of stories.

Following the attacks on Paris, and the Parliamentary debate on extending airstrikes from Iraq to Syria, most of the public discussion about Syria has focused on ISIS. Despite the horror ISIS has inflicted on Syrian civilians over the last year, however, more Syrians have fled their native country because of the bombing, terror and destruction caused by the Assad regime. According to a report from Rethink Rebuild Society, Over 85% of civilian casualties during the conflict are attributable to Assad. In addition to constant violence, as Nizar Hammodeh, from the Syrian British Medical Society, points out, Syrians leave their homes and communities when there is an absence of medial care. From the beginning of the conflict, which started in 2011, the Assad regime has purposely targeted doctors, identifying them at anti-regime protests, and shooting to kill. Doctors that treat protestors are kidnapped and detained, and likewise those that help them.

As a result of the four-year conflict, Syria has become, according to UN Special Envoy to Syria, Steffan de Mistura, the worst humanitarian crisis since WWII. It has resulted in the displacement of more than half the population, and the disintegration of Syrian infrastructure. More than four million people have been forced to leave Syria, and seven million internally displaced. There are currently 4,000 registered Syrian refugees in the UK, with the Government planning to take a further 20,000 by 2020. It isn’t enough, and will never be enough, as millions are forced leave their homes in search of security.

In the Khalili Lecture Theater at SOAS, the Syrians on the panel, representing different pro-Syrian organisations based in the UK, spoke repeatedly on the theme of getting Syrian voices heard. For Syrians, it’s a great frustration that both the left and the right of the British political spectrum seem intent on rehabilitating the Assad regime—which is, according to the voices in the room, the root of the Syrian crisis, and the main cause of the rise of ISIS. The following graphic from Syrian Network for Human Rights shows the scale of Assad’s killing in comparison with other combatants.

In the clamour over whether the UK should intervene militarily in Syria, Syrian voices and Syrian ambitions have been drowned out and rarely heard. On the one hand, the Government, following the debate in Parliament, has moved forward with airstrikes against ISIS-controlled areas of Syria. As the only target is ISIS, the airstrikes don’t address the problem of the Assad regime. “That we’re going to tackle ISIS and forget Assad,” said Yasmine Nahlawi, from Rethink Rebuild, “is not going to address the conflict. “To say that we’re going to address Assad without addressing ISIS is also not going to get us anywhere in Syria.”

It is likely that any action against ISIS, not preceded by civilian protection from regime brutality, will be met with low levels of support by Syrians.  This is why, when Boris Johnson, the Conservative Mayor of London, wrote a piece for the Telegraph this week saying it’s time to partner with Assad to defeat ISIS, many in the Syrian community, and others who care about Syria, despaired. Such an approach represents a departure from the Government’s long-held position. In February, UK Foreign Secretary Philip Hammond, reaffirmed that “[Assad] is the problem, not part of the solution.”

On the other hand, however, activists on the anti-war left, specifically in the Stop the War Coalition, refuse to allow the voices of Syrian activists—many of whom want limited military intervention to protect civilians—to be heard at their events. At the beginning of November at a Stop the War event at the Houses of Parliament, the chair, Labour MP Dianne Abbot, refused to permit Syrians to speak. As reported by James Bloodworth on the Left Foot Forward website, the human-rights activist, Peter Tatchell, who was at the event, said, “no Syrians were included on the panel and the Syrian activists who turned up to the event were threatened with arrest.” Syria Solidarity Movement’s Muzna Al-Naib took Abbot to task on Daily Politics following the incident.

“This was completely unacceptable, and is not in line with Labour Party policies: to be open and encourage debate,” said councillor Murad Gassanly, as he stood at the back of lecture theatre, addressing the room. Speaking to me later, he expanded on his statement.

“The undue influence by some very left wing groups within the Labour Party is extremely concerning. Stop the War is not part of the Labour Party, as simple as that. They do not speak for the Labour Party. I know a lot of members—councillors, Members of Parliament—who hold an absolutely opposite point of view, who opposed the intervention in 2014, for example, which would have targeted the Assad regime. And I think the priority for those MPs and councillors and members is protecting the civilian population, not fighting an ideological battle with the West.”

There was loud applause for Gassanly’s apology. The panel chair, Clara Connolly, thanked him, and spoke about how hard it has been to get Syrian voices heard. “So far Stop the War has absolutely refused to have a Syrian on their platform. Not just Stop the War platforms, actually, but other platforms as well. Syrian voices must be heard. There is an extraordinary amount of ignorance, rather than what’s actually happening in Syria, from those who decide the fate of Syrians, and even the MPs are not very knowledgable about Syria. So thank you.”

There has been a lot of debate about the number of so-called moderates inside Syria. Leading up to the Parliamentary debate on airstrikes, the Prime Minister argued that 70,000 non-extremist opposition fighters exist in Syria, which was challenged by many, including Boris Johnson. “Are there moderates in Syria?” a Syrian man in the audience asked, rhetorically. “The extremists are not Syrians, the moderates are Syrian! Fighters for ISIS are largely not Syrian, the killers in France were not Syrians. I’m sick of hearing the question of whether there are moderates in Syria. Syrians are, by and large, moderates!”

“Of course there are moderates,” another voice added. “But they are getting wiped out. Moderates getting wiped out by Russia, ISIS and the regime, and the longer the West waits to intervene, the fewer moderates there will be to work with.”

Nahlawi, as she presented Rethink Rebuild’s policy proposals for UK domestic and foreign policy on Syria, said, “We don’t need Assad or ISIS, we need a third option. We want to see a Syrian-led solution, by which Syrians reclaim the dream that they rose up for in 2011 to get freedom and democracy.”

The flagship policy proposed in the room in order to bring about the end of the conflict in Syria was a “no bombing zone.” This would require limited, civilian-focused Western military intervention. It is something that Labour MP Jo Cox, who abstained on the airstrikes vote, proposed in Parliament in October, together with Conservative MP Andrew Mitchell, and, according to Connolly, is supported by many of the activists inside Syria.

“Without this minimum protection of Syrian civilians, from indiscriminate air attacks, then we don’t see us moving forward to a political solution or any other kind of solution.”

“I’m anti-imperialist, and anti-intervention,” a Syrian man in the audience said. “But a no fly zone should be implemented.” Another said, “We want a no fly zone, as doctors in Syria called for, so we can have a peaceful revolution.”

Little, young Mahmood, another of the stories shared, loved the protest movement, and was known for holding the Syrian flag. He wanted to fight for his dreams, and was like a little beloved brother to the community around him. Then one day, he was taken away. He was returned, however, much to the relief of his family. But he kept showing up at the protests. And again he was taken and returned. When we was taken for the third time, his family knew he would never come back. Months later, they received a photo of his tortured body, which had been smuggled out. His dream was a free and democratic Syria.