Some blog posts you read can totally change your perspetive on an issue and make you see things from a totally different angle and this is from Jon Worth is one of them and I wanted to bring it to your attention.

“Eurozone crosses Rubicon as Portugal’s anti-euro Left banned from power” screamed Ambrose Evans-Pritchard in The Daily Telegraph on Friday last week. The Telegraph even followed up with a piece about why Portugal’s situation was a threat to everyone else. Everyone from Daniel Hannan to Owen Jones jumped on it, and even some sensible folks like Jamie Bartlett and Glyn Moody tweeted about the Evans-Pritchard piece.

The only problem was it wasn’t actually the Eurozone or the EU behaving badly at all. They’d not said anything. Ok, Portuguese President Aníbal Cavaco Silva’s words were unwise, but as Chris Hanretty pointed out in an excellent rebuttal, he was asking the largest political party to try to form a government, and that’s his call as the President.

I’m no specialist in the workings of Portuguese politics, but I know and trust some folks online who are – people like Rui Tavares and Filipe S Henriques, and neither of them vote right. So what did they say? 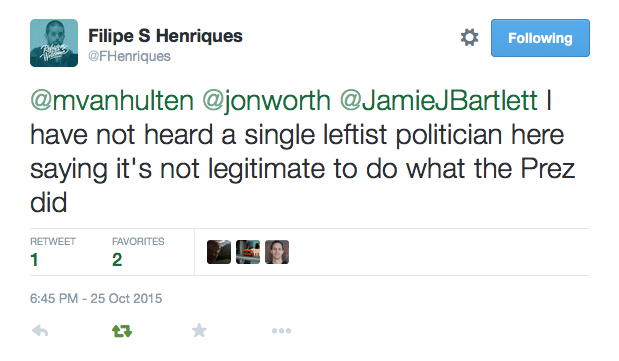 What they said also seems to actually be happening – it looks like Pedro Passos Coelho, the nominated Prime Minister, will not be able to put together a government that will pass a confidence vote, and hence the left will try instead. Which is exactly as it should work. This might not be a recipe for strong and effective government (as João Da Costa also points out) , but it for sure is not a coup.

You can read the full blog on his website.

Worth’s piece is an excellent read and for those of us who jumped the gun on the issue, it is a worthy reminder to look beneath the surface of any parliamentary deadlock.