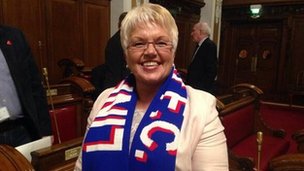 Good story by Sam McBride in today’s News Letter with comments from DUP Councillor, Ruth Patterson about the party going back into the Executive.

In the piece Patterson says;

As a former member of the UDR, and someone who has been in touch with many innocent victims over recent days, it deeply saddens me and gives me cause for great concern that the party have decided to return to government with Sinn Fein, who the leadership of the DUP have themselves accepted are inextricably linked to the IRA.

The electorate and many grassroots party members are understandably extremely confused and angered by this.

The DUP are in government under the premise, declared by Peter Robinson in 2008, that the IRA Army Council had disbanded and that all weapons had been decommissioned.

The report [on paramilitaries] makes very clear that not only are the IRA Army Council in existence but that many Sinn Fein members believe that they control the overarching strategy of a combined Sinn Fein/IRA strategy.

Further to this it is clear the IRA also maintain various departments and have access to weapons.

This blows the ‘no guns, no government’ and ‘sackcloth and ashes’ narrative out the window.

Comparing this will the treatment of David Trimble, Patterson says;

This is far and beyond anything that David Trimble ever agreed too.

I am a principled woman and many people will recall the video of myself when the Belfast Agreement was signed, being very upset and saying ‘God forgive them for what they have just done to Ulster’.

What the DUP, the party I have loyally served for 20 years, have now done is worse than anything David Trimble ever did, and therefore I feel it is my moral and principled duty to speak out.

We hounded David Trimble for far less and I would be a hypocrite if I became part of the silent majority that just went along with sitting in government with the surrogates of the IRA Army Council.