So averting gaze from the mesmerising polling of the UK election, and to the unfixed electoral politics of the Republic, here’s a constructive question. Is Fianna Fail on the rise again?

Mad, eh? Well, Jody Corcoran does not have a completely unblemished track record when it comes to predicting the future. Still, the 1400 at the party’s selection meeting in Kerry is larger than several parties’ national conferences, and 800 turned up in Sligo last week.

…popular mood – anger is probably the best word – is softening though, which should come as no surprise as the economy lifts and people return to their daily affairs with something more of a spring in their step and the promise of a few quid in their pocket.

The great irony is that as the economy lifts under the stewardship of Fine Gael and Labour, on a plan drawn up by Fianna Fail, so too will the fortunes of Fianna Fail rise, just as the cause and effect of austerity has damned them all too.

Fianna Fail’s story since their abrupt defenestration from power and its unofficial status as Ireland’s ‘party of government’ is largely untold. Probably because it has been so unspectacular as to be almost unreportable.

I recall Eamonn Mallie wondering out loud on Twitter at one point in the first six months of the new Dail sittings about where Fianna Fail was and why they were leaving most of the work of opposition to the smaller Sinn Fein delegation.

The answer to that was that Martin spent most of the first year to eighteen months out and around trying to reconnect with a huge and hugely demoralised activist base within the broad sweep of the country.

The common wisdom inside the party was ‘we have taken our beating and we know the people don’t want to hear from us just yet’. The plainer and more practical truth was that in the first months and years of the new government, FF would only have been attacking their own legacy.

Not of course that that would have stopped many of Mr Martin’s predecessors. But as one senior insider told Slugger during this period, ‘the problem with pure populism is that over time it can make you very unpopular’.

It’s also not within Micheal Martin’s temperament to run headlong at any problem. That indirectness has led to a lot of pent up frustration within the party, with the chosen medium for the expression of discontent usually taking the form of Galway West TD Eamonn O’Cuiv.

Much of the discontent has been over last two years when Martin has been berated publicly and privately for lacking a narrative. Hardest to endure for many has been the popular perception that FF has been slipping behind its Republican adversary Sinn Fein in the polls.

Indeed, if Ireland customarily voted for parliamentarians through a single national list system or even on three constituency basis of the European elections, last year’s elections would have been disastrous for them.

But whilst they secured just one seat (MEP Brian Crowley subsequently lost the party whip*) in the Europeans, the party quietly and without over much hoo ha in the press became the largest party in local government.

So keen was the party to show the fruits of this that the warm up act for the leader’s speech on Saturday was by newly elected councillor Jack Chambers who controversially took the candidacy for Dublin West from the party’s previous candidate, David McGuinness.

The real work has been on the policy front. In particular, Martin has used Health Policy as a way of differentiating his own pay from general taxation policy from Fine Gael’s Dutch model of paying for Health from a public health insurance scheme.

His call for the abolition of Irish Water and return of control to the local authorities who currently retain responsibility for most of its executive functions was commendably clear in his leader’s interview on with Richard Crowley on This Week (if not on the cost of doing so).

At risk at times of boring delegates, the vast bulk of the speech was policy, policy, policy. In effect Martin was talking up his party’s readiness to provide realistic alternative form of government.

This framing of the battle as one primarily between themselves and Fine Gael is crucial to the success of Martin’s strategy. For the first time in the last election his keynote speech was less a list of wishes and wants and more a programme of alternative action.

And a number of popular media  tropes were put to the sword at the weekend including a motion comfortably passed on Saturday morning ruling out a coalition with Fine Gael.

Hardly surprising since the seats most available to them to win in any number are currently in Fine Gael’s hands. By comparison, on Saturday Sinn Fein (who’s rise in the next Dail will almost certainly come at the expense of Labour) caught the back rather than the front of Martin’s hand:

We will never accept the claims of a sinister movement founded 40 years ago to have any link with 1916. The Provisionals remain a movement which covers-up the sickest of crimes in order to protect their members.

We will never allow them to rewrite Irish history to legitimise their despicable crimes.

The Proclamation is a noble statement of republican ideals. It was a profoundly modern document. It demanded that a true republic embrace change. It called for women to be given full political rights and the interests of children to be cherished.

It certainly energised a Fianna Fail audience many of whom have been reared on the blood of slain political enemies. As Fiach Kelly reports:

…on the floor of the RDS, delegates said they were heartened by recent attacking performances by Martin, both against Sinn Féin and the Government parties, which some felt showed their leader was willing to fight.

The counter argument is that focussing so much on Sinn Féin only highlights them as a radical alternative and gives them even more publicity.

By consistently highlighting Sinn Féin sex abuse controversies and other issues, while saying Fine Gael is too right wing, Martin is trying to create the perception of his party as the responsible centre ground.

It is telling that Martin reserved most of his time and energy on Fine Gael.

His Republican ‘takedown’ of Sinn Fein was served up in his Arbour Hill speech the week before was largely part of the ‘soldierly’ mood music for this Ard Fheis.

In it he laid out the grounds on which Sinn Fein remain alienated from both the origins and legitimacy of a state in which they propose to take power by democratic means, and used historic events to lay down a  contemporary political challenge to Sinn Fein:

These people read the Proclamation at their events. They hear the demand for honourable behaviour and service of the people before the movement and yet they keep going.

No member of the Provisional movement has yet lifted a finger to address the widespread abuse of children by their members and the systematic covering up of it up to this day. They shot children in the streets for defying them and they turned a blind eye to the abuse of children.

And back to reality

That people are starting to talk up the chance of veteran Bobby Aylward in Carlow Kilkenny raises another aspect of the coming election, the reclaiming of the brand and the brand heritage.

One former minister is reputed to have said as long ago as 2012 that the people went further in their punishment beating of Fianna Fail than they intended. That’s a matter for considerable conjecture.

Certainly the polls don’t indicate an early redemption, but in Ireland’s multi-member constituencies, a return of at least some of the older crowd is likely and probably inevitable.

Aylward’s backing from a headquarters which is still viewed by some as trying to control who gets back, indicates that sensitivities with the regard to the traumatic past have eased.

Indeed, Martin seemed for the first time to publicly relish the mix of experience and youth of a larger parliamentary party after the next election during his recent Late Late appearance. 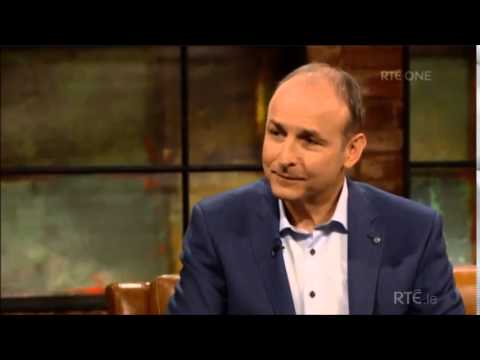 And towards the long future

In February this year, Willie O’Dea reprised three questions posed in An tSli, an tough minded think piece circulated in the party examining its post 2011 situation:

After this Ard Fheis, the answer to the first two are much easier to give than they have been for a very long time. But the third is work for a longer term when the party has a greater prospect of returning to power.

There were honourable mentions for De Valera in the speech (paying tribute to Deputy O’Cuiv in the audience), but the real ghost at the feast here was Sean Lemass, described by the Irish Times in 1959 as…

“…the most hard headed and least sentimental of our statesmen, with an intuitive understanding that the true approach to the North is by way of deeds, not threats or blandishments.”

What that ambitious third question begs is the introduction of grounded but politically imaginative approaches to a new century which promises to be very different from the last. Fianna Fail will have to find ways to work around its own deeply conservative cultural instinct to make that happen.

Or to quote my favourite conservative philosopher of the moment, Lampedusa: “se tutto deve rimanere com’è, è necessario che tutto cambi”, if you want things to stay the way they are, then everything will have to change.

*Interestingly Crowley is still a member of the party and listed as a FF MEP at the Parliament.