Slugger O’Toole (in partnership with Chambré Public Affairs and LucidTalk) hosted our first ever election debate at the Strand Art Centre last night between Gavin Robinson and Naomi Long.

For some this debate was controversial as it was a head to head between the two main contenders. [Ed – though they are the only candidates from parties who didn’t lose their deposit in 2010 who are standing this year, if you factor in the polling from previous and subsequent elections that suggests the majority of UCUNF’s vote was ex-UUP rather than ex-Tory.]

However, after a tense night at the Willowfield debate, both candidates were good humoured and friendly at the Slugger debate. The debate lasted just over an hour and with a sharper format we hoped to get some contrasts between the two candidates. If you want to listen back to the debate you can do so below.

Before we got going with the two candidates, LucidTalk pollster, Bill White polled our [Ed – politically skewed] audience to see what they thought were the important issues in this election and just who they thought would win in some key constituencies. 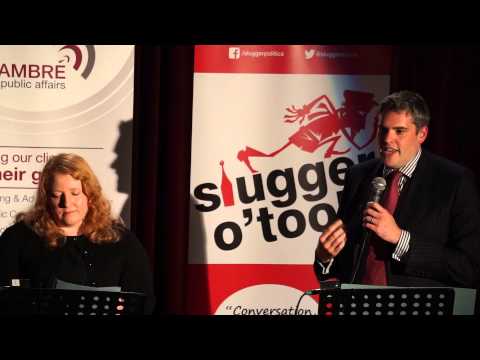 Our panel of Sam McBride, Alex Kane and Allison Morris quizzed the candidates for a little under an hour, under the moderation of our very own Alan Meban.

The debate covered a range of topics from pacts, to flag leaflets, the European Union and the recent racist attack in East Belfast.

For one of our panellists, Sam McBride a key take away moment was Gavin Robinson’s response to his leaders “Dry your tears away” comments as his report noted this quote from the DUP candidate;

Rather than put quotes from others to me, listen to what I have to say…while Naomi and I differ fundamentally on a lot of issues, she’s a capable politician. I’ve no difficulty in acknowledging that..Listen to what I say…you’ll not hear comments like that [from me].

The Belfast Telegraph’s, Rebecca Black picked up on an exchange between the two how certain businesses in East Belfast would be impacted if Northern Ireland left the EU writing;

The DUP candidate cited Ms Long’s recent comments that the area could lose out on manufacturing jobs if the UK was to leave the EU, her stand against paramilitaries in an interview with the Belfast Telegraph earlier this year and her concerns about Tesco leaving Connswater Shopping Centre.

Ms Long hit back saying she would not airbrush over issues and that she was being realistic.

“You need to talk positively,” Mr Robinson urged Ms Long, to which she responded: “we need to talk realistically”.

A total of six candidates are running for election in Belfast East: