Mairia Cahill was last night presented with the ‘Larkin Thirst for Justice Award’ at the Labour Party’s National Conference in Killarney.

The award, named after the trade union leader and founder member of the Labour Party James Larkin, is awarded to a person who, in their personal and/or professional life has made an outstanding contribution in the area of human rights and justice. 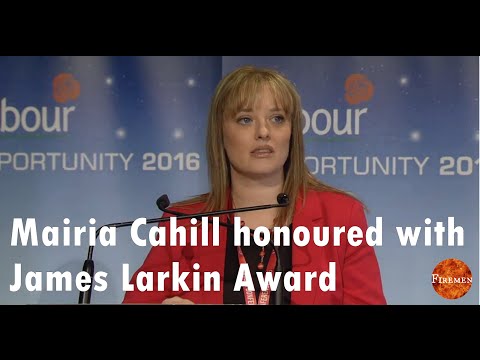 I’m honoured and very humbled by this award which I would like to accept, not on my behalf, but on behalf of every single person who has been abused and who is suffering the cancer of suffocation of not being able to tell anyone about their own experiences. If this is you, do it. Because it is in breaking the silence that things start to change for the better.

I am also deeply grateful to Jennifer O’Leary, Chris Thornton and the rest of the BBC Spotlight team for giving me a voice that was kept silent for years, but which I was finally able to use in October… and I’m grateful to them for dealing with the issue in a sensitive way and treating me with respect. Their programme, which won a prestigious Royal Television Society award two weeks ago, was the catalyst for the months which followed, and the forcing of Sinn Féin to admit the wider issue of the movement of suspected sex abusers around the country. Sinn Féin would never have admitted this had it not been for Spotlight, and the subsequent media interest, and the help of others along the way.

They have still not answered any of the questions which Spotlight put to them … not one. And they denied me my experiences and sought to discredit me. I will not allow them to do this. I suffered horrendous treatment at the hands of the IRA and Sinn Féin, and I am entitled to speak out about what happened to me. I will not be silenced because it is politically inconvenient for some.

Let me tell you what it feels like to be scared. I remember the first fingers laid on me and what that felt like. My childhood wiped in a split second. I remember the fright. The confusion. Being too afraid to open my eyes as the IRA man got a sick kick out of using me like a rag doll.

Not being able to scream out loud. Screaming inside my head instead. Keeping my eyes shut in the hope he would go away. Feeling the pain. Digging my fingernails secretly into my skin to that I could flip my head somewhere else. Wanting to be sick. Feeling owned. The smells. Disgust. Shame. Fear.

I tried to obtain justice for myself in a court, and I was badly let down. I will probably never get over the fact that my abuser is now free and will never be held accountable for his gross violation of not only me as a child, but his other victims.

Justice was ultimately denied to me. I had to endure four years from the point of complaint to trial, and it took it’s toll. Then, when I waived my lifetime right to anonymity to tell my experiences, I was subject to some of the most vile abuse imaginable in an effort to frighten me into silence. Every aspect of my life was scrutinised, from my weight, to my dress, I was told I “deserved to be raped”, that I was a “lying psycho bitch”, an “evil woman”, that I enticed my rapist with my virginity and was involved in a clandestine affair, graffiti was spray-painted on the walls of West Belfast – and this orchestrated campaign of vilification to save Sinn Fein’s neck on this issue was not condemned once by Gerry Adams, despite being repeatedly asked to do so. Non condemnation creates the conditions for it to continue and it is a very dangerous message to send to any victim of abuse. “Open your mouth and we will attack you, keep your mouth shut, or this is the collective treatment you will receive.” Well, that is a despicable way to treat any human being, and I will not allow any other victims of abuse to be further abused in this manner.

Ms. Cahill continues to be the victim of online abuse by a small but vociferous group on social media. One Dublin based man has alone posted over 1000 tweets on the subject and this week a Belfast based individual was charged under the misuse of telecommunications act and harrassment. A number of so-called ‘parody’ accounts attacking Ms. Cahill (the latest created only last night) have also appeared on Twitter.

A report by Sir Keir Starmer , a former director of public prosecutions for England and Wales, who was appointed to review all aspects of three prosecutions related to the Mairia Cahill case, is due to be published in the coming weeks.