364 days, an estimated 2,000 engagements, thousands of handshakes, around 25,000 tweets, and goodness knows how many selfies … that was a year in the life of Máirtín Ó Muilleoir as Lord Mayor of Belfast.

I’m sure many people rolled their eyes or tutted when they heard that the Lord Mayor had agreed to allow a professional photographer to follow him around. From August 2013 through to June 2014, Donal McCann captured images wherever Máirtín Ó Muilleoir went, including travelling with him to San Francisco at the personal expense of the mayor. People. Buildings. Transport.

While it could be written off as a vanity project, the photographs captured show that a frenzied Lord Mayor makes a great muse for a talented photographer.

I missed Donal’s exhibition in the middle of the Belfast Festival: by the time I made my way to – and found! – the Golden Thread Gallery the exhibition was over. But around sixty five of the photographs have been published in a limited print-run landscape A4-sized book – We, Too, Sing Belfast – which is available in bookshops and online. 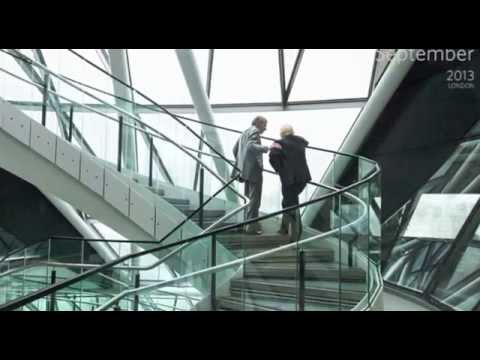 Máirtín Ó Muilleoir rarely talks about himself or his family. In the conversations I’ve had with him over the years, he’s unlike many other public figures who lapse into telling stories about themselves. Instead Máirtín is a serial networker, so he talks about people he’s met, and more often than not, people who he’s going to meet and thinks you’d want connect with. Máirtín’s not in every shot in the book, and not always the centre of attention.

The shots you’d expect are included: walking up the big staircase in the city hall, chatting to London Mayor Boris Johnson, bestowing the freedom of the city on Van Morrison, freshly sprayed pink hair during the Giro, working in the back of a car and talking on his phone. The man always has a phone in his hand.

Donal has an eye for composing shots, using the stark vertical and horizontal lines in rooms and buildings to frame Máirtín, and allowing reflections to add a layer of mystery to many his photographs.

Images from the Lord Mayor’s Christmas Day visit to the Welcome Organisation shelter on the Falls Road tell the story of someone who committed their year to highlighting everyone in the city. The whole city is included in the book including a spectacular shot over the urban metropolis from up in the Belfast Hills. An introduction by retired PA journalist Deric Henderson fills in the background of the Mayor and his two stints as a councillor in the Dome of Delight.

Politicians from other parties are notably absent from the photographs selected for the book. Gerry Adams appears a couple of times, pouring tea! But it’s far from simply being a piece of Sinn Féin propaganda puff.

Half way through the book there’s a shoulder-to-waist shot of a man wearing medals and holding a walking stick. The militaristic imagery jumps out reminding readers that Máirtín Ó Muilleoir was the first republican mayor to attend the Armistice Day ceremony in Belfast City Hall’s Garden of Remembrance.

The last shot shows Máirtín putting on his jacket and walking out the back gate of the City Hall to head home shortly after handing over the chain of office to new Lord Mayor Nichola Mallon. Only a few months later his run into work was extended with a move up to Parliament Buildings as an MLA.