On October 22nd 2014 Health Minister Jim Wells spoke at a meeting of the Committee for Health, Social Services and Public Safety and was there, as stated by Chairperson Maeve McLaughlin in her introduction, to “to give evidence on the terms of reference for the Committee’s review of the departmental approach to the Budget”.

All was going swimmingly with much discussion of priorities for 2015-16, budgetary constraints, ‘Transforming Your Care’, Ebola, revenue generation, efficiencies and potential savings until THAT moment.

After a brief discussion on the ban on smoking in pubs introduced in Northern Ireland in 2007 (which Chris McGimpsey helpfully pointed out that the current Health Minister voted against), Jim Wells remarked on the success of the ban:

The classic example is — I have said this before in the Assembly — if you go to a hard-bitten social club in west Belfast tonight, you will see six-foot tall men with skinhead haircuts, tattoos and earrings standing outside in the rain smoking, and this is probably the only law that they have obeyed in their life. Why? Because they respect the law that says you smoke outside in the street rather than in a pub or a restaurant. Adherence to this has been almost 100% – JIM WELLS 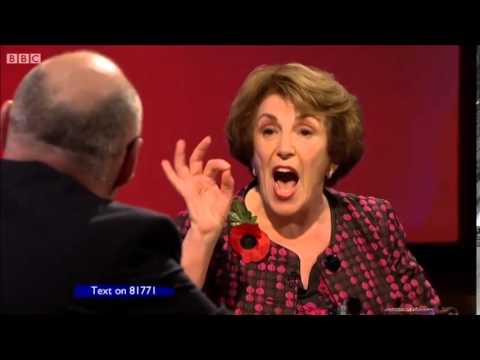 Surely MLAs on the committee would be outraged at such a slight, storm out of the meeting, condemn Mr. Wells and force an immediate apology and retraction.

What really happened as documented the official Hansard transcript of the meeting was this :

The Chairperson (Ms Maeve McLaughlin): OK. You are running the risk of stereotyping every person in west Belfast.

Mr Wells: Only those standing outside drinking clubs at midnight.

The Chairperson (Ms Maeve McLaughlin): We need to be mindful of stereotypes in all of this.

Mr Wells: Both sides of the wall.

The Chairperson (Ms Maeve McLaughlin): There are factors other than simply lifestyle choices.

Mr McGimpsey: I welcome you, Jim, to the Committee and to the job. It could not have happened to a nicer guy.

At the conclusion of the meeting Jim Wells clarified his position:

Madam Chair, you rightly picked up on a phrase that I meant rather facetiously. My comment would apply to any working, Rangers or Celtic pub or loyalist club anywhere in Northern Ireland. I was not particularly homing in on west Belfast. I was trying to make the point that the adherence of every community in Northern Ireland to the smoking ban has been almost 100%, and that is to be applauded. I was not trying to denigrate the people of west Belfast in any way – JIM WELLS

The Chairperson Maeve McLaughlin seemed happy with this response:

OK. Thank you. Hopefully, this is the shape of things to come in these discussions – MAEVE McLAUGHLIN

So all’s well that ends well.

But wait a moment…

Such was the developing crisis that Stephen Nolan devoted almost 20 minutes of his television programme to a discussion on the issue.

Why, he wondered, had it taken Paul Maskey, Sinn Féin MP for West Belfast so long to respond; calling for the minister to withdraw the comments, describing them as “absolutely shocking” and “offensive”.

Jim Wells has painted the people of west Belfast in a totally negative light with this outrageous stereotype. He also characterised people in west Belfast as lawbreakers. He needs to publicly apologise for these grossly offensive remarks. Instead of casting aspersions on entire communities – PAUL MASKEY

Mr. Maskey explained that he had been flicking through Hansard and when he came across the transcript of the meeting he was “totally shocked”.

Presumably none of the other Sinn Féin members present at the meeting such as Mickey Brady, Rosaleen McCorley, or the aforementioned Chairperson Maeve McLaughlin thought that a DUP Health Minister “casting aspersions” on the good people of West Belfast was worth bringing to the attention of the MP for the area.

Cynics may suggest that perhaps Sinn Féin referred to the matter as a smokescreen to divert from more serious issues facing the party.

Despite Jim Wells having declined an invitation to appear on the programme Stephen Nolan had achieved a Major coup by having former Conservative Party Junior Health Minister Edwina Currie on board to give her eggspert analysis.

The Twitterverse had the temerity to question Ms. Currie’s credentials for voicing her opinions on West Belfast, tutu wearing skinheads and indeed tattoos generally so we posed a (hopefully) pertinent question:

Seems the pantomime season has started early in Belfast.