I don’t know whose idea it was to have a debate on Margaret Thatcher in the House of Commons. Glenda Jackson (no, I didn’t know she was still there, no idea John Whittingdale was still there either) could not stand the restraining convention of polite respect.

She exaggerates, of course, she’s a politician after all. Care in the community was, for instance, poorly thought out and ill-managed, but did eventually lead to a civilised move a way from life time care in large Victorian institutions.

But some of it of it was real enough from my own experience of working in London schools in the mid to late 1980s: 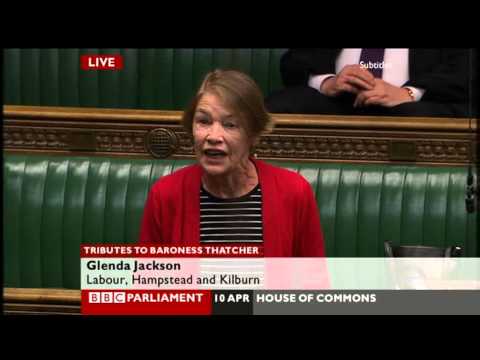 This was supposed to be a debate, rather than an enforcement order… Or was it? Here’s the wording for a ‘general debate’ on the motion:

‘That this House has considered the matter of tributes to the Rt Hon Baroness Thatcher of Kesteven LG OM’.

Some stayed away in protest…

Former Treasury and housing minister John Healey complained there would be no chance to debate Lady Thatcher’s legacy and accused prime minister David Cameron of using her death ‘for narrow political gain’.

Mr Healey added: ‘He’s wrong to recall Parliament, and wrong to hijack it in this way. I will play no part and I will stay away, with other things to do at home in the constituency.’

Call me old fashioned (and I accept that here on Slugger we do have our own quaint conventions here for obit threads), but forcing a debate on ‘tributes’ is an odd use of parliamentary time for MPs…