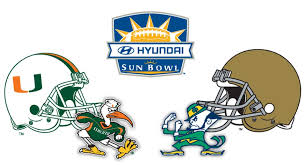 One for the Diaspora…..Tonight in El Paso, Texas, Brian Kelly’s University of Notre Dame side renew their once bitter rivalry with the Hurricanes of the University of Miami,Fla. in the much anticipated Sun Bowl.

It’s a season finale which Fighting Irish fans could not have dared for just seven weeks ago, when successive defeats to Navy and Tulsa had left the South Bend team requiring victory against a ranked Utah side, Army and, of course, the aul’ enemy, University of Southern California (USC) just to put the Fighting Irish in a position to qualify for a semi-decent bowl.

Of course, the Sun Bowl ain’t no BCS game, and Kelly will know that Year 2 of the new era must deliver a major improvement if he is to avoid facing a barrage of calls for his head from an as ever impatient Fighting Irish support base which has grown weary of harking back to yesteryear.

Even the title to this blog- Catholics v Convicts– recalls a pivotal encounter during Notre Dame’s last National title winning season, during a period of years from 1988- 1990 when these two former heavyweight collegiate sides regularly did battle with one team or both in contention for National title glory. Alas, sitting with 7-5 records going into tonight’s contest, those days look as distant as ever.

But enough gloom. Kelly has already begun to make an impact in the recruitment stakes, and retaining the services of Michael Floyd and Kyle Rudolph, whilst continuing the maturation process for a defensive unit which had finally begun to deliver in November will be key to lifting the aspirations of Notre Dame in 2011. But most important will be getting the quarterback decision right, and Tommy Rees will have a chance to take a giant stride towards filling that position with a solid performance tonight.