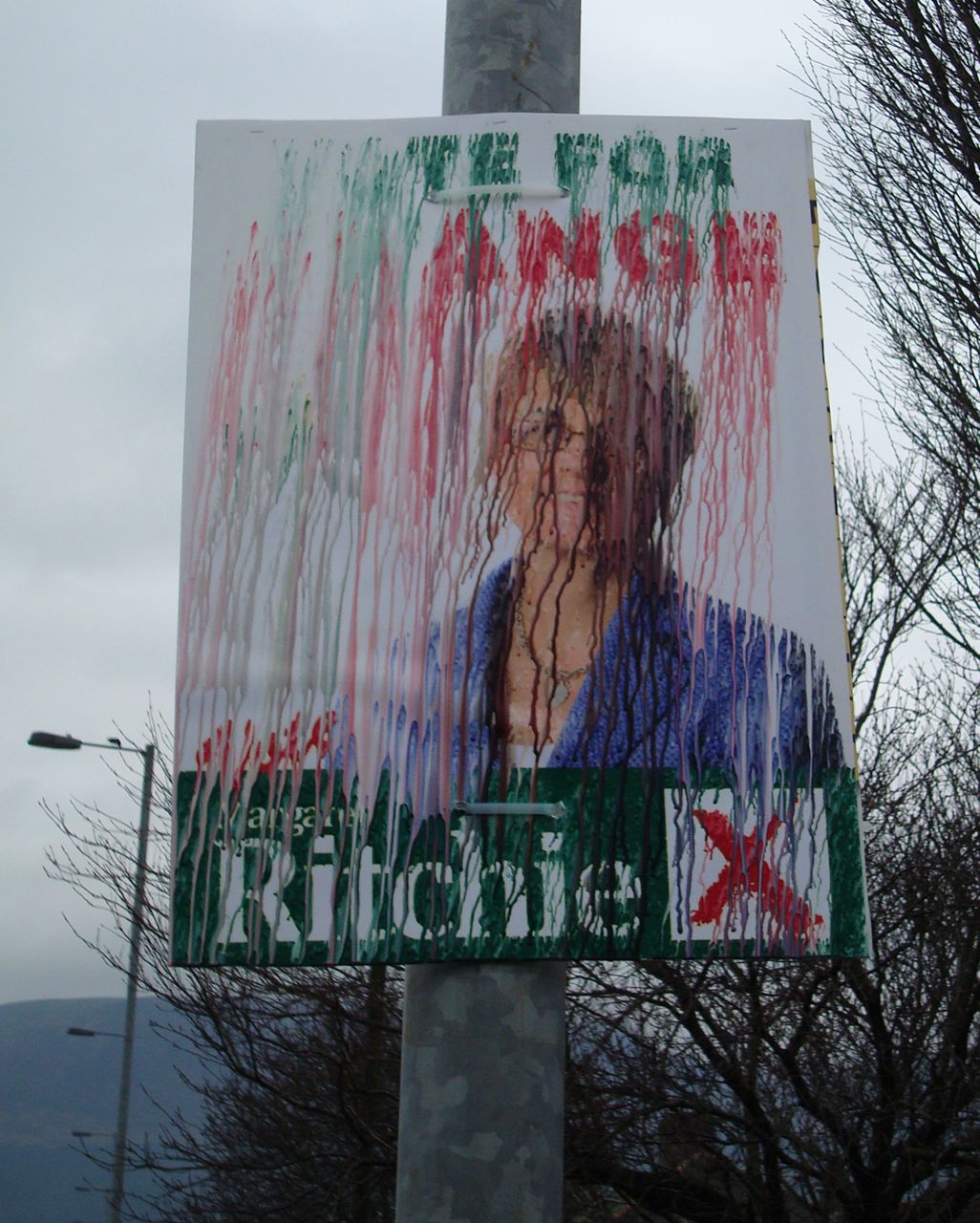 I’ve found my thick pack of papers from February’s SDLP conference in the Slieve Donard Hotel in Newcastle and the memories are flooding back. Right in the heart of Margaret Ritchie’s rain-swept South Down constituency, she wrestled the leadership of the party from the clutches of Alasdair McDonnell.

Lamp posts were adorned with water-damaged posters. Inside the hotel, there was the air of an Ideal Home Exhibition with badges and stickers being handed out everywhere you went.

… the candidates’ youthful supporters were wearing branded T-shirts, and sticking badges on anyone who would take them. Unfortunately young women, wearing short skirts and “I’m with Alasdair” T-shirts didn’t really match McDonnell’s image. And I’m not sure Margaret Ritchie benefited from helium balloons and the outdoor posters whose ink ran in the rain.

Over two and a bit days, the party tried to squeeze in debate around 172 motions. The social and party aspects of the Social Democratic and Labour Party were evident by the late – and sparse – start on the Saturday morning.

There was much talk about the potential devolution of policing and justice, and much finger wagging in the direction of Alliance “as they preen themselves for undue office”.

Mark Durkan delivered his last speech as party leader: an emotional seventeen page affair. Much applause and many tears. Back in February I commented:

I saw an old-fashioned party with social media logos on their conference platform stage. I saw the golden opportunity of a live broadcast given over to the outgoing leader’s speech rather than launching the new leader’s vision. I heard no one say a bad word about Mark Durkan.

But for all the talk of change, I’m not sure how the public will notice the SDLP different next week, next month or next year.

We will, in time, deliver a United Ireland but we will be credible. (Our opponents think the takeover will happen in 2016 because it is the 100th anniversary of the Easter Rising. Not credible.

Following the example of other parties, the agenda for the SDLP conference this weekend in Belfast will be one filled with panel discussions.

After 10 minutes on Parades, and 20 on Justice, an hour and a half has been set aside tonight for a discussion about Jobs and the Economy with chair Alasdair McDonnell joined by economists like John Simpson and Oxford Economics’ Neil Gibson.

Saturday morning devotes a 90 minute slot to A Shared Society with the Presbyterian Moderator Norman Hamilton joining CRC’s Duncan Morrow and others in a discussion chaired by Conall McDevitt.

And on Saturday afternoon after the live TV coverage (strike permitting?) has finished, Mark Durkan will chair an all-island panel discussing A United Ireland.

Margaret Ritchie ran for leadership under the slogan of “Let’s Make History”. While history is a long term venture – usually written up after you’re long gone – I’m still not sure if I can yet point to tangible evidence of solid foundations being built in the nine months since her election as leader. The party is definitely continuing on in the direction that she set, but is it really snapping at Sinn Fein and the DUP’s heels?

Hopefully I’ll be along at the conference on Saturday morning. The first thing I’ll check in the conference manual will be to see if Cromac Branch have submitted the same motion as last year!

(Motion 78, February 2010) Conference urges the Assembly Group to resign from the Executive and to form an Opposition to the DUP/SF Coalition.

Now that would make history.