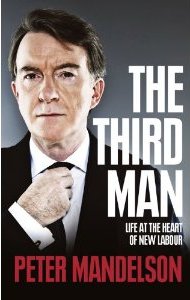 Short answer: very little, other than he enjoyed the environs of Hillsborough Castle, enjoyed working with the local politicians, and has Gerry Adams to thank for Bobby his dog.

Peter Mandelson’s book The Third Man has captured media headlines in recent weeks as the Times serialised the most juicy bits. But what did he have to say about his time as Secretary of State for Northern Ireland?

In the book, Mandelson seems much softer than his normal Prince of Darkness image, No doubt, the fact that he was writing this particular history had something to do with that! He comes across as easy to get on with, less defensive of his own position that perhaps he should have been (eg, he could have done more to save himself from being fired the second time), picking up strong friendships in each of the different roles he has tackled over the years.

It was Gerry [Adams], in one of our very first meetings, who had prompted me to get a pet. He had told me how much easier he found it to think difficult issues through when he was on a long walk with his own dog.

He even offered to get one for me. That was vetoed by my security officials, no doubt because they feared a listening device would be embedded into one of the dog’s paws. But it prompted me to find Bobby, whom Gerry seemed to dote on almost as much as I did.

About thirty pages out of the 560 are devoted to his time over in Northern Ireland.

It was not easy to maintain the proper balance all the time, and both sides were eagle-eyed for anything they could interpret as bias. I had to learn to rely on a skill which, to my detriment and perhaps New labour’s, I had deployed all to infrequently in my political career: quiet diplomacy. In Belfast I had to listen as much as talk, understand the goals and motivations of all sides, identify areas where they, and I, could give ground.

Compared to other books I’ve read recently – my bedside table has been going through a political phase with David Gordon’s The Fall of the House of Paisley and Martina Purdy’s Room 21 – Mandelson’s memoir was a lot less forensic (unless he was personally in trouble) and tended to give more colour than detail.

The Alliance Party don’t get a look in. But then, the DUP and SDLP play second fiddle to the UUP and Sinn Fein in his abbreviated narrative.

When the peace process – or should that be, the devolution process – went off the rails, Mandelson seemed to get a lot less personally frustrated than Mo Mowlam had. He seemed to take David Trimble and the UUP wobbles in his stride.

The Hinduja passport affair interrupted Mandelson’s stay in Hillsborough Castle. If his detailed recollection is to be believed, his misfortune to be fired was as much caused by Alastair Campbell’s mis-briefing of the lobby (twice) as by any wrong-doing on Mandelson’s part.

When [Alastair] left the room, I could see there was no persuading Tony. ‘This is absurd,’ I said. ‘How can you dispatch me because of a purported phone call and a bunch of inaccurate briefings and a stream of Chinese whispers?’ … In a final, feeble, appeal, I said, ‘You’re not going to end my entire ministerial career for this, without even knowing the full picture?’

Anji [Hunter] embraced me, crying, as Tony wrote out my resignation statement …

So unless you want to following the ins and outs of New Labour, no need to buy or borrow Mandelson’s book!