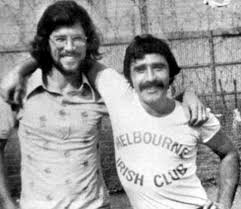 THIS voice from beyond the grave was widely expected, yet the claims are no less diminished for all that. The words of former IRA commander Brendan Hughes, pictured left with Gerry Adams:

There was only one man who gave the order for that woman to be executed… That man is now the head of Sinn Fein. I did not give the order to execute that woman — he did. And yet he went to see [Jean McConville’s] kids to promise an investigation into her death.

And making a mockery of Adams’ claims never to have been in the IRA, Hughes said:

I never carried out a major [IRA] operation without the okay or the order from Gerry [Adams]. And for him to sit in his plush office in Westminster or Stormont or wherever and deny it, I mean it’s like Hitler denying that there was ever a Holocaust.”

Given Hughes’ standing within republicanism, these are claims that Adams – who carried Hughes’ coffin not so long ago – will find hard to dismiss.