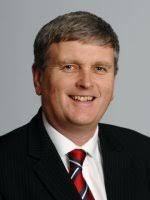 JIM Wells is first to break cover and come out with an unequivocal and stout defence of Peter Robinson on Nolan’s 5 Live show earlier (starts about 1hr 5mins in).

There are people who do support Peter… My analysis of the facts, as they stand at the moment, would indicate to me that Peter Robinson, the First Minister of Northern Ireland, has done nothing wrong which would warrant his resignation or removal as First Minister and I will be supporting him to remain as First Minister and continue the good work he has done.

The thing is, we may almost be beyond the point of no return here – it no longer seems to be about whether Robinson has or hasn’t technically breached the ministerial code. What happens if Robbo is cleared and the governments rally behind him, but the drip-drip effect of more stories continues to erode public opinion and opponents take advantage, which is inevitable before an election? Do the DUP really want to fight an election with a lame duck leader whose private life and financial dealings dominate the agenda?

Robinson may find he is in the position Trimble once found himself in – a man good for the process, but toxic to his party.When Nolan put it to Wells that Sinn Fein will be wondering if Robinson’s capable of doing a deal now, the DUP man responded:

Peter Robinson is capable, there’s absolutely no doubt about that. He’s one of the most capable politicians ever to have graced the scene in either Northern Ireland or the United Kingdom (sic). He is continuing as First Minister and no doubt will take on the battle with Sinn Fein as he has been doing up to now. So I think you can rule that out.

But I think it is important that rather than allowing this feeding frenzy to continue by the media, that we accept that the facts as they stand at the moment indicate that he should not be leaving office at this stage – or in fact for many years – and he should be allowed to continue the work that he has been doing so well over this last 18 months.

There’s something deeply admirable about Jim doing this, though some will dismiss it as panglossian naiveté. Ten out of 10 to Jim for loyalty, but will others now follow?