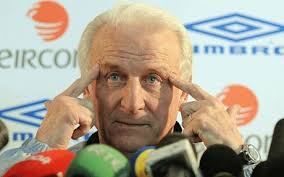 Irish soccer stories would appear to be like buses at the moment. First, Derry City implode then the Irish Football Association is taken to the cleaners by its former Chief Executive.
But undoubtedly the main footballing story this week is the impending contest between the Republic of Ireland and France. The first leg of the play-off is tomorrow night at Croke Park, and anything other than an Irish victory will likely spell the end of the Nation’s hopes of the return of World Cup fever, the infectious bug which has joyously spread across Ireland on five occasions since 1982.
Check out Soccer Republic for anorak coverage. Real heart and head time when it comes to predictions, so I think I’ll opt for the former: 1-0 to the Irish, setting up a tense second leg in Paris Wednesday night.
Northern Ireland are also playing tomorrow night, with Serbia providing the opposition at Windsor Park.