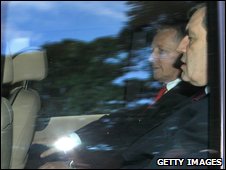 WITHOUT any surprise or fanfare, the talks on devolving policing and justice have ended without agreement. It kinda leaves you wondering why Brown got so involved at this stage, though I suppose he must have had reasons.

It’s been known for some time that a sound financial package (which everyone wants) and ‘community confidence’ (which is whatever you want it to be) were two of the DUP’s conditions for accepting the devolution of P&J. Now there are a few others being mentioned from an 8-page dossier/shopping list, which probably explains why the DUP and SF are negotiating the transfer of powers separately. It might be helpful to spell out the ones we’re aware of.

According to Mark Devenport, the Three ‘R’s are;
– Retaining the full time police reserve
– Reviewing the withdrawal of personal protection weapons (PPWs)
– Replacing the Parades Commission, which may build confidence amongst unionists, according to Mark’s report.

On the first two of those three, this report in today’s Tele can only bolster the DUP’s arguments. According to FoI responses, 2,030 former army and police officers hold PPW licences and 172 guns have been taken back this year when three-year licences came up for renewal. None were taken back in either 2006 or 2007 and four were removed last year. So the DUP sees a recent big increase in removing PPWs at a time of growing threat to those holding them.

With exquisite timing, former Police Federation chairman, ex-RUC officer, Policing Board member and DUP Assemblyman Jimmy Spratt has teamed up with current Federation chairman Terry Spence to argue that “the threat against on-duty and off-duty officers had greatly increased in recent months and warned that the phasing out of the full-time police reserve is going to place even more pressure on frontline officers, potentially leading to a breach of their health and safety”.

We’re also reminded that: “Over the past year 30 PSNI officers have been so concerned about their safety that they have been forced to move home.
420 viable devices have been found in 750 security alerts across Northern Ireland in the last two years.”

While the Federation – essentially the PSNI’s union – obviously has a selfish and vested interest in fighting cutbacks, the statements make clear the political battleground. The recent bomb finds and murders indicate a high level of threat to the police, and that makes security cuts unpalatable to the DUP. At the same time, Sinn Fein won’t accept any rolling back of implementing the Patten recommendations. But Spratt asks the question; if the police can’t cope and the threat escalates, will the Chief Constable – even an advocate of community policing – be forced to recall the military for police support? That is a line SF does not want to see crossed, as it plays into the hands of their militant dissident opponents.

Ironically, the one thing that would strengthen the DUP’s position the most, and weaken SF’s more, would be a successful dissident attack on the security forces – such as a mortar attack on an army base. Mainstream republicans will argue that it is in the interests of ‘securocrats’ to play up the dissident threat, but despite the dismissive language about ‘micro-groups’ SF seem positively obsessed about dissidents’ growing ability to influence events.