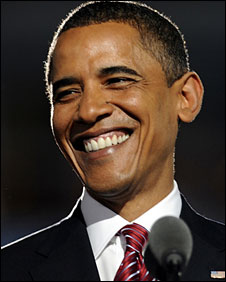 WELL, dunno about you but I’ve just watched Obama give what was billed as the speech of his lifetime. And what a show it was from a gifted orator. Was it enough to make him the next US president? I think that’s another matter, but tonight was a night in which Obama set out his stall – not in any great detail, but with an appeal for change and a vision for the future that will attract many undecided Americans. I’m not sure that it’s enough though…A few stream of consciousness notes…

Obama tried hard to portray John ‘How many homes do I own?’ McCain as out of touch, with many appeals to the middle classes. Healthcare and education were prominent in his thoughts, and he tried hard to side with workers as opposed to big business.

Nothing new there, but the US sub-prime situation doesn’t prove Republicans are best suited to protect the consumer against purely selfish interests.

There were few hard promises, but he did vow to cut taxes for 95% of working families, and, noteably, he was strong on environmental issues, saying America would not be dependent on middle-east oil in 10 years time. I find this hard to believe, but with the promise of $150 billion investment in renewable energy, a dent could be made.

How Obama will pay for his promises seemed quite vague; cuts in bureaucracy was what I got from it.

Obama was strong on rewarding personal responsibility, edging in on family values territory perhaps more associated with Republicans. But BO has made a big deal about his family, and the image his own provides will perhaps help reassure those of a more conservative persuasion that his liberal tendencies are tempered by traditional values.

He returned many times to the military. Like a liberal democrat, he supports the troops, but not necessarily the war, or how it is fought. He obviously favours greater diplomacy than the Republicans. But we also know he’s flip-flopped here, thanks to McCain’s effective negative campaign. His challenge to McCain to debate foreign policy is one the media must be relishing.

I was wondering if he would be as crass as to compare his speech to the ‘I have a dream…’ one, 45 years ago, almost to the day. And he did, but not charging foward in the blundering manner one of expects US politicians. I do wonder if Americans want a dream right now, while hard economic reality is biting. And Obama is sometimes reminiscent of Blair and Clinton, who so convincingly backs him. But these liberal leaders had the benefit of a favourable economic wind which BO doesn’t.

I just wonder if Obama, like the two leaders just mentioned, will end up being as strong on rhetoric and image… but as weak in substance. A fantastic and inspiring speech, but at the moment, I think I’m still betting on McCain to win.

These are just a few initial thoughts. I’m packing my bags for America, so hopefully I’ll have a more informed opinion while blogging next week!