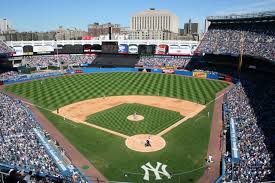 Those with an eye to American sports will have noted that one of the country’s greatest sporting arenas, Yankee Stadium, is in its final year of usage ahead of its demolition as the Yanks head across the road to a new Yankee Stadium. The famed stadium- nicknamed ‘The House That Ruth Built’ after the great Yankee player, Babe Ruth- has been in use for 85 years, home to baseball’s version of Kerry footballers (the Bronx Bombers’ 26 World Series titles comparing well with the Kingdom’s 35 All-Ireland titles.) The stadium hosted the annual All-Star game during the week, and throughout the season broadcasters, players and fans have been reminiscing about the great sporting events hosted by the famed Bronx arena (Baseball, American Football and Boxing among them.)
As reported in this week’s press, the future of the Maze/ Long Kesh site remains one of the core issues requiring agreement between Sinn Fein and the DUP in the weeks ahead if the Executive deadlock is to be broken.The initial plans for a multi-sport stadium on the site have faced considerable opposition within unionism, though of course the ex-DCAL Minister, Edwin Poots, was a known supporter of the proposal. Indeed, the fate of the Maze/ Long Kesh stadium reminds me of Kris Kristofferson’s timeless classic, Darby’s Castle, in how the fixation of the main character with his vision inevitably led to his downfall (well, to some degree anyway…)
There have been threads about this issue in the past, and doubtlessly will be more in the time ahead. However, I’d like to focus on the changing face of stadia in Ireland today in this thread, without recourse to the bigger political discussion.
As a lifelong avid sports enthusiast, I’ve long been fascinated with sporting arenas regardless of sporting code. There is something unique and special about certain sporting arenas. I remember being on a bus trip to Dublin with members of a GAA club some years ago during the (albeit lengthy) renovation of Croke Park. I can vividly remember the passengers bursting into a spontaneous round of applause when the stadium came into view, reflecting through their admiration the collective pride at what the amateur sporting organisation had succeeded in building. And anyone who has been lucky enough to visit the Catalonian capital of Barcelona will know that a trip to the Nou Camp is a mandatory part of the tourist agenda (and the Olympic Stadium- home to Espanyol- is also impressively designed and set amidst beautiful surroundings.)
Of course, growing up in the USA I had previous experience of such impressive sporting edifices. Fenway Park, Wrigley Field, Madison Square Garden, Notre Dame Stadium and the Rose Bowl are all stunning arenas in their own right, with a sense of history to rival those of the sporting arenas of which we are more familiar with across the water, the latter having undergone extensive modernisation in the aftermath of the horrific Hillsborough tragedy. Glasgow Rangers fans will know that, in the mid-1980s, the club’s famous Ibrox Park stood alone as an all-seater stadium in Britain due to the club’s experience of an earlier terrace tragedy.
But here in Ireland, Croke Park’s renovation has signalled a new era for domestic sports stadia, with stadia across the country undergoing large scale renovation or being completely rebuilt as a result of the economic boom brought about by the Celtic Tiger.
Whilst Croke Park currently stands alone as Ireland’s premier first-class stadium to rival international venues of similar stature in the modern era, it will shortly be joined by the impressive new home for international soccer and rugby at Lansdowne Road.
The provincial headquarters for Leinster and Munster rugby (Donnybrook and Thomond Park) are being improved, whilst numerous county GAA grounds and local soccer stadia have made smaller scale improvements to their grounds. In Ulster, almost all of the county grounds have had a face lift in the past decade, albeit with terracing set to remain a feature of GAA grounds long into the future (and many would welcome that, not least the Hill 16 Dubs, though I must confess to not being a fan of terracing.)
In the north, Linfield seem set for an almighty legal battle with the IFA if the latter proceed with stated plans to abandon their contract with the Blues and leave the ground ahead of the necessary stadia improvements. In any case, a Windsor Park without the international team would seem far too big for even the most supported club team in the north, and it would be interesting to hear Blues fans’ ideas about what the club might do if faced with that scenario.
Other Irish league clubs have made small scale improvements to their grounds, with Cliftonville in the process of building a second modern stand and many other clubs making similar small step improvements.
Eircom league clubs have also been making improvements to their grounds, with some notable clubs- like Drogheda and Derry City- having ambitious proposals for new all-seater stadia in the pipeline (subject to finances and, in the case of the former, planning approval.)
The Maze/ Long Kesh stadium proposal is probably the only realistic proposal which will involve the building of a stadium to rival Croke Park and the new Lansdowne Road in Ireland. A division of the available money for stadia improvements between the three codes will undoubtedly involve a considerable reduction in the scale of the projects involved, with partial renovation of Ravenhill, Windsor (or a new East Belfast-based stadium for the Glens and Northern Ireland?) and several GAA county grounds improving the stock of stadia here but not developing anything with the ambition to rival Dublin’s two sporting arenas.