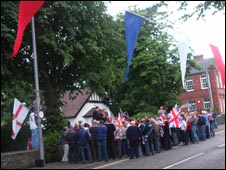 Orangemen in Larne have staged a protest outside Council buildings after the Council failed to erect (and pay for) red, white and blue bunting in the town. The DUP Mayor, Bobby McKee, cited equality laws as the reason why Larne Council has failed to erect the bunting. A Council spokesperson claimed they had asked the Order to seek funding for “cultural activities” which could have been used to pay for the bunting, which raises the intriguing prospect of Larne Council paying for green, white and orange bunting under cultural activities were it to be sought at some stage.