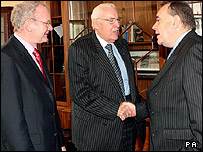 THREE hundred years after the Act of Union, the UUP’s David Burnside tried to put Ian Paisley on the spot over his relationship with the SNP premier of Scotland. Paisley’s much more practical about his relations with separatists these days, and brushed of the broadside with a comment amounting to ‘Salmond’s got his views, I’ve got mine, and we don’t let that get in the way of working together for our mutual benefit’ – although there is perhaps more ambiguity in the First Minister’s response than first meets the eye. The dialogue between Burnside and Paisley is copied below the fold, alongside some discussion of the First Minister’s recent News Letter interview in which he argues that his decision to share power with Irish republicans has been vindicated.From Monday’s Hansard:

The First Minister: The Member will be aware that the deputy First Minister and I met the First Minister of Scotland earlier this year. At that meeting, we acknow­ledged our shared culture, history and interests, and discussed greater co-operation between our two Administrations for mutual benefit.

Mr Burnside: Will the First Minister withdraw his support for the Scottish First Minister’s statement that he wished in the future that The Queen should become queen of Scotland? That could only take place after the ending of the 1707 Act of Union. Will he disassociate himself from those remarks and give a commitment that the only queen that we will have in the future in the United Kingdom of Great Britain and Northern Ireland will hold a unitary crown — one crown, and one queen for the whole of the United Kingdom?

Burnside is asking his question on the back of this Telegraph interview with Salmond. Here’s the relevant extract:

But if he wants political divorce from England, Wales and Northern Ireland, there is one aspect of the relationship that he is keen to maintain – the monarchy.

This may be surprising from the leader of a party with a huge republican element but Mr Salmond is unequivocal in his support for the Queen and the institution she represents.

“I find the Queen in very lively form. She looks in robust health and I envisage her as being Queen of Scots for a very long time to come.

“The monarchy is very important because some people, not many hopefully, still have the impression that in gaining independence and political control – so far as you can have it in the modern world – we want to shut ourselves away from everyone and everything.

“It is just the opposite. Things we enjoy and have in common would still be shared. In the sense that the monarchy is a symbol of that social union then I think it is very important to stress that point.”

Now, for a hardline Unionist, Paisley’s view is remarkably sympathetic to Salmond’s – a nationalist who is ‘soft’ on the monarchy. The Queen can be the ‘Queen of Scotland’ in the same way as she is the head of state in other countries, for example Australia, but that doesn’t make those countries part of the United Kingdom. I find Paisley’s relaxed attitude to Salmond’s position more typical of an ‘Ulster nationalist’ than a ‘British unionist’, and while he adds that he believes and stands for a union of England, Scotland, Wales and Northern Ireland, it’s a far cry from the booming rhetoric of the past.

Similar sentiments could be detected in Paisley’s interview with the News Letter’s Stephen Dempster the other day. Asked how we arrived at this point, Paisley answered:

“Well the major division in our country was always on politics and I am a strong believer and have always preached that if there was going to be a deal done it would be by the people of Northern Ireland. It would not be done by the influence of the British Government or the American authorities. And until the leaders of the Ulster people did it there could be no peace in Ulster.

“We had people coming in and pushing us around and telling us how to run our lives. We resisted that and while what we have is not perfect for anyone, we stuck by the principles of democracy and we got there in the end. The victory was won.”

And asked how he felt about doing the deal with republicanism, the First Minister said:

And we persisted on our course until people supported law and order and proper democracy. And Tony Blair didn’t do anything, it was the Ulster people and their leaders made the decision.”

The interview is worth reading, as it clearly shows a man concerned with the legacy he leaves behind.