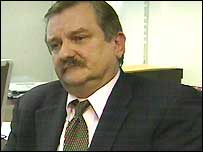 AN astonishing claim was made in the High Court yesterday. A lawyer for the Department of Social Development said the department believes Finance Minister’s Peter Robinson’s allegations that developer Sheridan Group was involved in IRA money laundering are “ill-judged and unfounded”.

This is similar to the view of the police and NIO, but the barrister for DSD went even further stating that Sheridan boss Peter Curistan (pictured) believes that Mr Robinson acted as “the voice piece of a commercial trading rival” who was disappointed at losing out on the Queen’s Quay contract.

The lawyer also claimed that in letters to the department from Sinn Fein leader Gerry Adams and SDLP leader Mark Durkan it was suggested that Robinson was motivated by “commercial rivalry”.

This is incredible stuff; Curistan’s case is being taken against DSD, not Robinson, yet here we have one branch of the Stormont government repeating highly damaging allegations against one of its most senior members – when normally you’d expect a government to defend all its constituent parts to the hilt.

DSD is quite prepared to lay into the Minister in charge of the Department of Finance for accusations made in a previous life – and at a time when the relationship between another DUP minister and a property developer is causing massive controversy. The Minister for Social Development is, coincidentally, the SDLP’s Margaret Ritchie. The case is expected to wind up today, so there might be more on this to come.