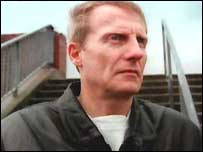 FAMILIES of some of eight men murdered by the notorious Glenanne Gang of loyalist terrorists, soldiers and police officers in the South Armagh area in the 1970s are expected to respond later today to a ruling by the European Court of Human Rights that alleged security force collusion in loyalist murders was not properly investigated. The cases were taken after claims made by ex-RUC officer John Weir (pictured) claimed to the BBC a group comprising UVF terrorists, UDR soldiers, RUC officers carried out a series of shootings and bombings. Weir’s affidavit in 1999 (in support of, but completely tangential to, Sean McPhelimy’s somewhat obfuscatory collusion claims) is one of the most explosive documents on collusion in the public domain, although whether he understood the bigger picture of what the slaughter he was involved in was promoting remains unknown.