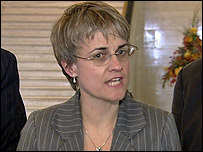 AS speculation grows that Social Development Minister Margaret Ritchie’s announcement on whether funding destined for the UDA’s favoured community scheme will go ahead or not is imminent, I wonder if she’ll get much political cover for her decision. Alliance’s David Ford points out how her Executive colleagues (especially the DUP and Sinn Fein) have already hung her out to dry. The NIO did the same, with Woodward shafting her in an equally sneaky fashion and providing the UDA with cover, despite her threat to withdraw loyalist funding being popular with a public fed up to the back teeth with the government – whether direct rule or devolved – mollycoddling terrorism. Liam Clarke suggests some political interference from Hugh Orde could prove helpful, while a drip feed of funding could be one way of to “exert maximum pressure and maintain the initiative as she pushes the UDA to keep moving”. There is also an opportunity for the Irish Government to intervene, as it has good relations with the SDLP and has been building bridges with loyalism.