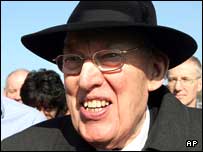 The DUP’s kick for touch today has put the spotlight on the British government. Secretary of State Peter Hain has staked a lot on Monday’s deadline being rock solid. With Gerry Adams indicating that Sinn Fein believe the British government must follow through on its commitments to put Plan B into operation in a post-March 26 scenario, the focus will now be on whether or not the coming hours bring with them a fudge from London, or a wake up call for the DUP.The failure of the DUP to meet the deadline will be interpreted by many as indicative of the failure of the DUP leadership to prepare the ground within the party for the prospect of power-sharing with Sinn Fein. There is nothing to indicate that the DUP will not spend the next 6 weeks seeking yet more excuses for further postponing the devolution date, and that is obviously something which will be foremost on the minds of the governments in London and Dublin.

Sinn Fein President, Gerry Adams, may have envisioned this scenario when he indicated that the 26th March deadline may not be met. What will be interesting in the short term is whether or not Sinn Fein seek to row back promises made by the British government to the DUP which were contingent upon the 26th March deadline being met. For example, where does the DUP’s cold feet leave the legislation over the retention of academic selection? Republicans could also seek moves by London to expedite the Irish Language Act through legislation.

What is clear is that Sinn Fein’s hand has likely been strengthened by this last minute retreat from the DUP, an irony which should not be lost on the DUP. But this will not come as a surprise to those who believed the failure of the DUP to cross its rubicon prior to the Assembly election was always going to leave plenty of room for last minute jitters. Whilst Ian Paisley may have carried the vote today, what has become clear in recent days is that the quality of those dissenters from within his own party remains a significant obstacle to further progress in the north of Ireland.