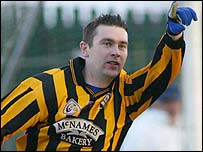 Mick’s already pointed out that this weekend provides a real sporting feast for Irish fans across the globe. Aside from the rugby and cricket, there’s the small matter of Crossmaglen’s bid for their 4th All-Ireland, with ‘The Gooch’ Cooper and Dr. Croke’s standing in their way. Also, Derry’s own John Duddy was victorious last night in front of a sell-out crowd in Madison Square Garden, retaining his IBA title and moving him closer to a challenge for either the WBA or WBO crown. Also in the States, the darlings of Irish America, Notre Dame, lost out in their First Round appearance in the NCAA Basketball tournament last night, going down to the lowly Eagles of Winthrop- ah well boys, there’s always next year!