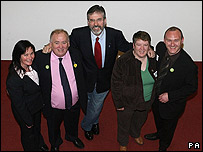 In a result unparalleled by any other party, Sinn Fein has taken 5 from 6 seats in west Belfast, on the back of a superbly delivered vote management programme. The party’s first preference share of the vote was a whopping 70%, with the SDLP seeing its core base vote reduced even further to just 4,110 votes. In spite of improving her 1st preference vote, Diane Dodds lost out on the final seat, marking the DUP’s only incumbent loss of the election. The Republican Sinn Fein candidate polled 427 votes and, with Sinn Fein’s share of the overall vote rising here, speculation that grassroots alienation with the direction of the republican leadership has once again been exposed as unfounded and ill-advised.