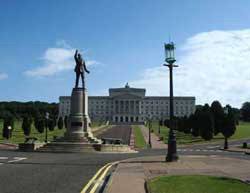 The Sunday Life is in a hopeful mood with its predictions for the 10 ministries in an Executive. With more big names than seats available its stuck its neck out for who will get the positions. It expects it to be a 4-2-2-2 split with two women taking seats. So the faces they are saying to look out for our – Robinson, Dodds, Foster, Campbell, Murphy, Gildernew, Durkan, Maginness, Empey and Birnie. (Hat tip to D)The Foster prediction will raise the most eyebrows on the DUP end. Her legal background makes her a good candidate for a shared policing and justice ministry. However, she is very capable and on geographical and gender representation it does make sense. On the UUP front there is a major question mark over Esmond Birnie. He by no means lacks the ability but the UUP’s electoral chances in south Belfast make it unlikely that he will be in a new Assembly. On the Sinn Fein end, the exclusion of someone from Belfast is interesting. Murphy’s inclusion would contribute to speculation he is a future leader. The Murphy and Gildernew pairing would also be seen as a gift to the backwoods were unease appears to have been greatest. The SDLP names go for a Belfast and Londonderry split.